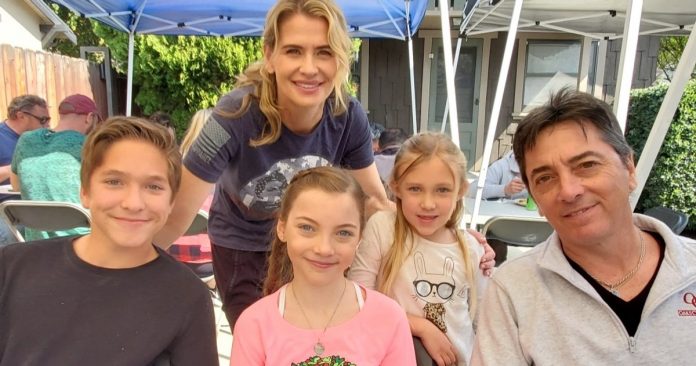 On an average day, the fact that Scott Baio and Kristy Swanson had crawled out of the dustbin of bad movie history to shoot a new divorce comedy would be news enough. But we’re living in weird times. And that calls for even more bizarre news. Apparently, the plug has been pulled on this duo’s latest big screen endeavor, titled Courting Mom & Dad, because the production simply couldn’t adhere to new guidelines for health, safety and child welfare.

SAG-AFTRA ordered shooting to stop completely on Courting Mom & Dad. They are accusing the producers of having, “failed to comply with LA County Health Orders and SAG-AFTRA protocols in connection with COVID-19 as well as California regulations related to minor performers.”

What the violations against the child actors were has not been discussed or disclosed. Scott Baio, who became a teen icon in the ’80s for starring on Happy Days, Joanie Loves Chachi and Charles in Charge, is headlining the comedy. He stars opposite Kristy Swanson, who made a name for herself in such cult horror fare as Buffy the Vampire Slayer and Deadly Friend. Neither actor is a marquee name, and both have been in the news more for their political views than their output as actors.

Courting Mom & Dad is coming from Revenge Movies LLC. It revolves around a married couple, played by Scott Baio and Kristy Swanson, who have three children. The kids team-up to seek the help of a personal injury attorney hoping to stop the impending divorce that mom and dad have decided is necessary. The Guild released the following statement.

“[the SAG-AFTRA members] are hereby instructed to withhold any acting services or performance of any covered work for this production until further notice from the union. Please note, accepting employment or rendering services on Courting Mom & Dad, may be considered a violation of Global Rule One. Violating this order may result in disciplinary action in accordance with the SAG-AFTRA Constitution.”

Those are some heavy words being handed down by The Guild. At this time, SAG-AFTRA is not offering a detailed account of what exactly occurred on set to get the comedy shut down. The union’s Global Rule One requires members to work only for signatory companies. It states as follows.

No member shall render any services or make an agreement to perform services for any employer who has not executed a basic minimum agreement with the union, which is in full force and effect, in any jurisdiction in which there is a SAG-AFTRA national collective bargaining agreement in place.”

It’s unclear if the production was targeted due to anything related to the political landscape in Hollywood. At this time, Revenge Movies LLC is not responding to requests for comments. This news originated at Deadline.

Avril Lavigne To Perform One Night Only Virtual Concert: Details

Cineworld Cinemas Could Collapse as Stock Plummets Amid Coronavirus Fears