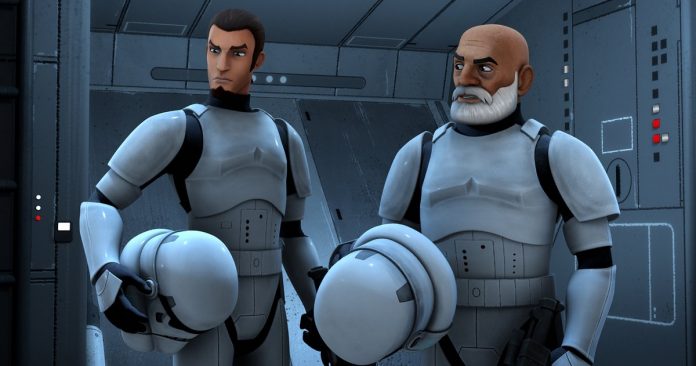 Now that The Clone Wars has wrapped up, Star Wars fans have some questions about Order 66. The series ends where Revenge of the Sith begins, while revealing that Ahsoka Tano was able to survive. It also showed that she helped Captain Rex remove his chip, which doesn’t exactly line up with what the character said in Rebels about escaping his programming. Some fans have considered this to be a plot hole for Order 66, but Dave Filoni has set the record straight, like he always does.

When it comes down to it, Dave Filoni doesn’t feel like The Clone Wars set up an Order 66 plot hole at all. Instead, it comes down to semantics and what the characters are trying to convey, which also comes down to the Star Wars creative team doing some creative retrofitting. Not everything will work out as expected, but Filoni does his hardest to make sure all the pieces fit. He explains.

RELATED: Baby Yoda Gets a Darth Maul Mashup That Turns Pure Evil Into the Cutest Thing Ever

“I think when you reach [Rex] in Rebels and he says, ‘I took out my control chip’ to Kanan as a way of explaining that we all can make a choice. I think he sees that as true and I think it’s one way that he’s coped with things. He did get it removed. Kanan doesn’t need to know the minute details of Rex’s life.”

Nobody really knows the Star Wars franchise the way Dave Filoni does with the exception of George Lucas who created the whole thing. With The Clone Wars coming to an end, it actually makes Rebels more compelling since we know what came before and how meaningful it was. Filoni wants the story to be real for the characters and the audiences. He had this to say.

“I think that’s where you can get hung up on continuity so much that you don’t actually tell a story that’s about real people. So Rex at that moment tells Kanan the point of view Kanan needs to understand who Rex is and what he’s really about. Later on, do they have a scene where they get into the truth of it that was a lot scarier? Probably, but I think Kanan also knows that. So I think it takes them [Ahsoka and Rex] a long time to cope with everything. The life they knew is gone. It’s tough. It would be hard because with The Clone Wars, I know where it ends. I don’t get to have the parade in this one unless it’s the ‘Imperial March.'”

Dave Filoni is a Star Wars fan first. This is probably why the majority of hardcore fans really enjoy The Clone Wars, Rebels, and now The Mandalorian. He is able to tap into the old school feelings of nostalgia while tapping into something new at the same time and he genuinely hopes that the fans enjoy what they are trying to do. You can read what Filoni had to say about his expectations below.

“I do hope that the audience took heart in the fact that Rex and Ahsoka came through largely intact as far as who they are as people trying to help other people. I think that could be a positive out of this. You know that if you watch other series that they can go on to do great good as well. That they can be an inspiration to others and help. That they are both actionable people to do good.”

Just about anything in the Star Wars franchise can be twisted and turned into a plot hole. We’re looking at a ton of spin-offs that come from one source: A New Hope. Just about everything laid out before and after stems from one movie, so there are bound to be some things that need explaining at some point or another. You can read the rest of the lengthy interview with Dave Filoni over at Nerdist.

John Legend Gets ‘Wine Drunk,’ Sings ‘All of Me’ in Onesie at Universal Studios