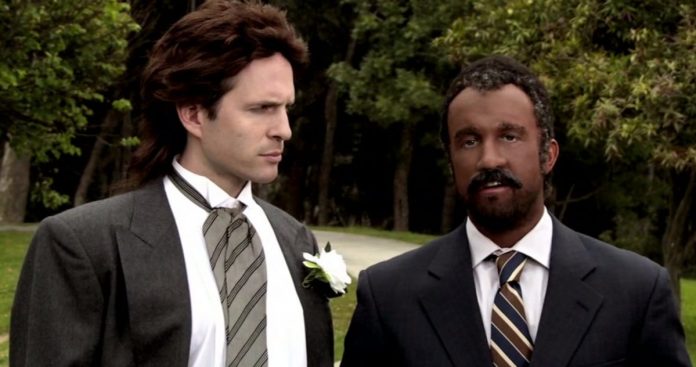 Netflix U.K. has removed an episode of It’s Always Sunny in Philadelphia due to the use of blackface. Mass protests over racism and police brutality continue to rage across the world and the entertainment industry is starting to reassess some of their past material. The long-running Cops TV series and Live P.D. have both been cancelled in the wake of the George Floyd tragedy, while other shows like The Dukes of Hazzard are facing backlash for the use of the Confederate flag. Bo and Luke Duke could very well be pulled from Amazon in the next few days.

Even Nickelodeon’s Paw Patrol is under scrutiny at the moment. So, when Netflix U.K. was alerted to It’s Always Sunny in Philadelphia season 6, episode 9, where Mac (Rob McElhenney) and Dee (Kaitlin Olson) don blackface, they decided to pull it. The show goes into a discussion about blackface and whether or not it’s racist, hilarious, or possibly artful. Whatever the case may be, Netflix swiftly removed it. As of this writing, the episode is still available to stream on Hulu in the United States.

It’s Always Sunny in Philadelphia was clearly trying to discuss the topic of Blackface in their own way. The cast and crew certainly are not racist and the episode does not come off that way, but maybe they could have approached it without actually busting out the makeup to do it. The show could have just used the images of Hollywood actors doing it, which is featured in the episode, and left it at that. It would have arguably been just as good as it ended up. It’s not clear if Hulu will go on to follow in the footsteps of Netflix U.K.

What is perhaps more interesting is that Netflix in the U.K. have reportedly left up the episode titled The Gang Makes Lethal Weapon 6, which has Mac donning black face again to play Danny Golver’s character Roger Murtaugh. This episode could be considered perhaps more offensive than the one that was removed. It has been reproted that four episodes in total have been taken down in the past few days.

Blackface has come up a lot over the past few years as it seems a lot of entertainers and politicians have done it in the past. Ted Danson came under fire for doing it in the early 1990s when he was dating Whoopi Goldberg, Howard Stern did it quite frequently in the days of his Channel 9 TV show back in the late 80s, Jimmy Fallon donned Black Face in an SNL sketch in 2000. Blackface started falling out of favor in the 1930s, but it was still prevalent into the 1950s on the big screen.

The League of Gentleman has also been removed from streaming services in the U.K. since a character is portrayed in blackface. Shows Little Britain and Come Fly With Me have been dropped by BBC and BritBox for the same reasons. It is unclear if and when the aforementioned shows, or even the It’s Always Sunny in Philadelphia episode will be back. For now, we’ll just have to wait and see how this all plays out. Digital Spy was the first to report about Netflix U.K. pulling an episode of It’s Always Sunny in Philadelphia over blackface controversy.

Topics: Its Always Sunny in Philadelphia

Tom Cruise and Elon Musk Are Making a Movie in Outer Space with Help...