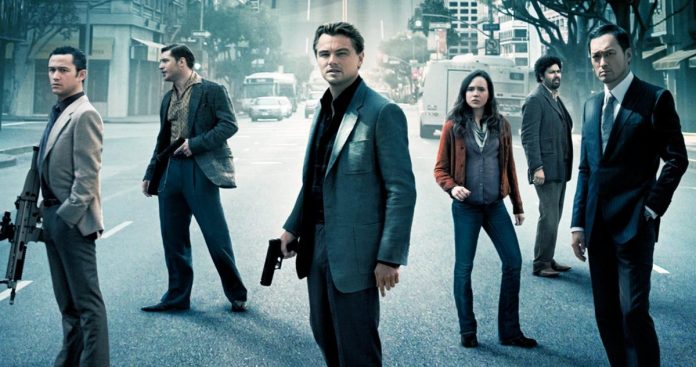 Christopher Nolan’s Inception is returning to theaters to celebrate its tenth anniversary on July 17th. Warner Bros. had originally planned to put Nolan’s Tenet out on that date, but it will come out on July 31st instead now. Inception stars Leonardo DiCaprio, Tom Hardy, Joseph Gordon-Levitt, Ellen Page, and Marion Cotillard. That special anniversary event also will give audiences “a never-before-seen look at footage from Tenet and an exclusive sneak peek of select films on Warner Bros.’ upcoming slate.”

As for the other movies being previewed, it’s unclear what those will be. However, there is hope that it could be a look at James Gunn’s The Suicide Squad or even Matt Reeves’ The Batman. Bringing Inception back into theaters is a great way to test the waters and see if people will be visiting movie theaters or not. There has been great speculation as to Tenet‘s release date staying on schedule, especially after the studio kicked Wonder Woman 1984, which was supposed to open in August, to October.

Inception is a trippy Christopher Nolan movie. The story revolves around Leonardo DiCaprio’s character, who is as a professional thief. However, he isn’t a normal thief as he steals information by infiltrating the subconscious of his targets. He is later offered a chance to have his criminal history erased as payment for the implantation of another person’s idea into a target’s subconscious. Even after originally opening in theaters 10 years ago, people are still talking about Inception and all of its twists and turns. When promoting the movie Nolan said he wanted to explore “the idea of people sharing a dream space… That gives you the ability to access somebody’s unconscious mind. What would that be used and abused for?”

Christopher Nolan had the original idea for Inception kicking around in 2005, though it looked much different. It was originally going to be a horror movie about dream stealers, which was all based on lucid dreaming. After writing the original treatment, the director felt he needed more experience before tackling something as big as Inception. So, he went on to do 2005’s Batman Begins, 2006’s The Prestige, and The Dark Knight in 2008 before circling back to his first version of the story.

After working on three hit movies, Christopher Nolan had the clout to basically do whatever he wanted, so he spent six months tweaking and rewriting Inception until he felt it was ready. The movie grossed over $829 million worldwide and became the fourth highest-grossing movie of 2010. Many consider Inception to be one of the best movies of the 2010s, though there are still plenty of people who have no idea what’s going on in the story. It will be interesting to see how many people end up coming out for the anniversary screenings in a few weeks. Business Wire was the first to announce the Inception tenth anniversary screenings.