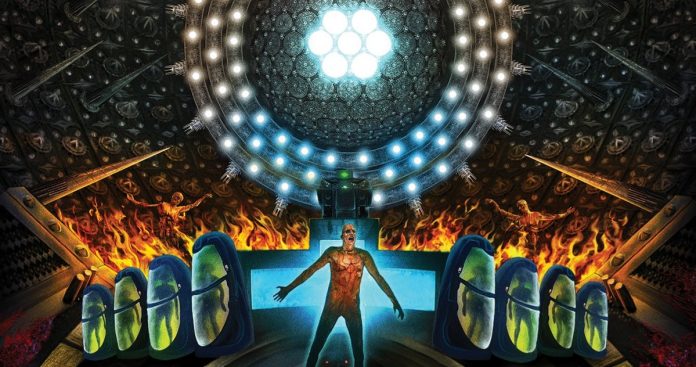 One of the 90s most phenomenal horror movies is getting a huge new release from Scream Factory this September. In space, you will be hearing many screams as the studio unleashes 1997’s gruesome Event Horizon on an upgraded and definitive blu-ray release.

Its name: Event Horizon. The high-tech, pioneering research spacecraft mysteriously vanished without a trace on its maiden voyage seven years ago. But a weak, persistent signal from the long-missing craft prompts a rescue team, headed by the intrepid Captain Miller (Laurence Fishburne), to wing its way through the galaxy on a bold rescue mission. Accompanying Miller is his elite crew and the lost ship’s designer (Sam Neill). What they uncover is unimaginable interstellar horror.

RELATED: Tales from The Darkside: The Movie Is Getting a Collector’s Edition Blu-ray This Summer

National street date for North America (Region A) is planned for Sept 29th. Note that the date could change as Shout! Factory are still experiencing a domino effect from the current pandemic which has caused numerous delays for earlier releases in their schedule. It’s still an unprecedented time in which getting access to talent for extras or setting up film transfers are more challenging than they were before for the studio.

Pre-order Event Horizon now at ShoutFactory.com. The first 500 orders will include an exclusive limited-edition 18″ x 24″ rolled poster of the exclusive new illustration.

John Wick 4 and Saw 9 Get Delayed a Full Year as Lionsgate Shifts...

Marvel Studios is Developing a Nick Fury Series for Disney+,…