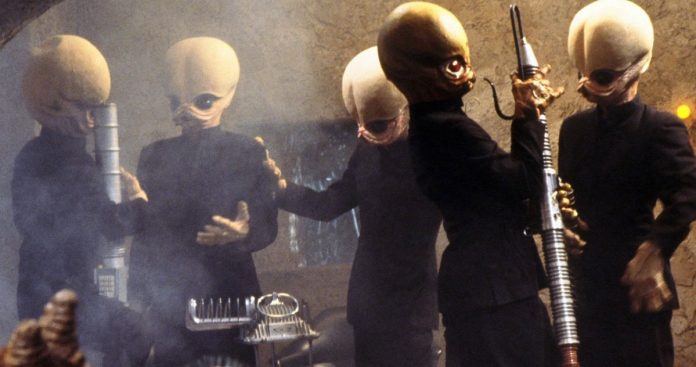 Star Wars: The Rise of Skywalker skipped out on a saga tradition as evidenced by some recently released concept art. The sequel trilogy as a whole is divisive amongst Star Wars fans, with The Last Jedi and The Rise of Skywalker being placed under the microscope more so than the first installment. Regardless, Lucasfilm and Disney knew there was no way that they were going to be able to please everybody with all three movies.

J.J. Abrams was brought back on board for The Rise of Skywalker after previously helming The Force Awakens. The director did not anticipate coming back to finish the trilogy and the Skywalker Saga as a whole, but decided to come back. Thanks to some new concept art from the final installment, we now know that there was supposed to be a cantina band on Kijimi. Artist Adam Brockbank shared his design that he created for that band, and it’s a pretty big departure from the Mos Eisley.

RELATED: The Last Jedi Actor Thinks Broom Boy Will Return as a Jedi in a Future Star Wars Movie

This Cantina band would have had more of a technical look to them. They have futuristic instruments, one of which looks like an extreme keytar while another looks like a floating space theremin, along with robotic looks. They almost look like the Star Wars version of Daft Punk, ready to rock Coachella. In the end, it’s unclear why the cantina band element from the movie was cut out. These designs would have looked great on the big screen, even though they would have only been shown for a few seconds before cutting away to the action.

Instead of the cantina band on Kijimi, Star Wars fans were treated to a John Williams cameo, along with a ton of Easter Eggs celebrating the iconic composer’s long career. J.J. Abrams and crew made sure to include as many hidden references to Williams as they could, which is all documented in the extra material found on The Rise of Skywalker Digital and Blu-ray releases. When looking at the John Williams element, the Kijimi cantina really didn’t need a band, but it would still be interesting to learn at what point the idea of ditching the cantina band came about.

Lin-Manuel Miranda and J.J. Abrams collaborated on some music for The Rise of Skywalker. The actor/musician also has a small cameo in the movie towards the end. Miranda’s music can be heard during the Pasaana scenes. However, this was not the first time that Miranda collaborated with Abrams. Previously Miranda wrote music for The Force Awakens titled “Jabba Flow,” which is the music playing in the cantina where we meet Maz Kanata for the first time. While the cantina band was not included in The Rise of Skywalker, there were plenty of other things going on, so it’s understandable why they didn’t make the cut. You can check out the original concept art featuring the band below, thanks to Adam Brockbank’s Instagram account.