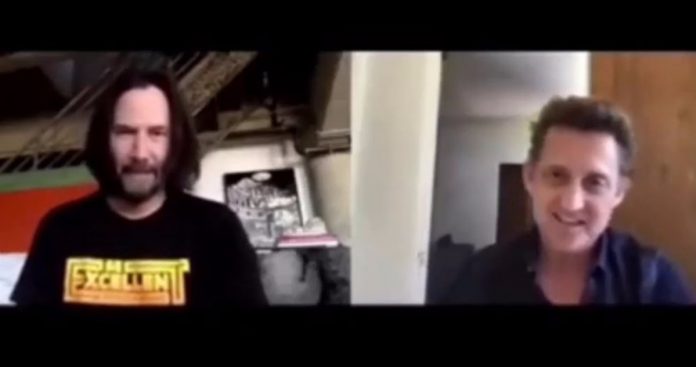 Keanu Reeves and Alex Winter are reminding us why they’re among the most wonderful celebrities of all, surprising the graduating students of San Dimas High School during their virtual graduation ceremony. In Bill and Ted’s Excellent Adventure, the original movie to feature the famous comedic duo portrayed by Reeves and Winter, Bill and Ted attend SDHS, delivering their famous history report at the end of the movie.

They might have only been fictional graduates of the school, but that still wasn’t going to stop Bill and Ted from wishing the real-life students well with their future endeavors.Video of the special appearance has since made its way to YouTube, and you can check it out for yourself below.

RELATED: How Steven Soderbergh Helped Bill and Ted 3 Finally Get Made

In the video, Keanu Reeves and Alex Winter introduce themselves with their real names, though they then refer to themselves as the Wyld Stallyns. The two most excellent actors then speak to the graduating students about how they weren’t able to enjoy a proper graduation ceremony, though a special appearance from the famous duo has certainly made that a little better for them. Reeves and Winter also encourage the students to be excellent to each other, and that kind of positivity during a particularly dark year is exactly what so many of us need right now – especially the graduating class of San Dimas High School, who got to experience the moment firsthand.

There’s a lot of excitement surrounding the return of the Bill & Ted franchise this year. After nearly three decades since the pair had last been on the big screen in 1991’s Bill & Ted’s Bogus Journey, Reeves and Winter are reprising the roles once more for their upcoming sequel. Called Bill & Ted Face the Music, the sequel is written by original creators Ed Solomon and Chris Matheson with Dean Parisot directing. Filming has since been completed and a trailer is expected to debut online very soon.

In the first movie, Bill and Ted traveled through time, meeting famous figures from centuries past to pen the perfect history report. Bill and Ted’s Bogus Journey introduced William Sadler as Death, bringing Bill and Ted into the afterlife as they navigate through both Heaven and Hell. Bill & Ted Face the Music will pick up decades later, with the pair now raising their daughters played by Brigette Lundy-Paine and Samara Weaving. This time, the Wyld Stallyns will be tasked with creating the perfect song in just 78 minutes in order to save all life on Earth, as well as the entire universe.

Officially, Bill & Ted Face the Music is scheduled to open theatrically on Aug. 21, 2020. That could obviously change, depending on what happens with the plans of movie theater chains to begin reopening locations this month. There has been speculation that the third Bill & Ted movie will either get a theatrical delay or go straight to a digital release akin to Scoob! and Trolls World Tour. For now, we’ll just have to wait for the official word from the studio, but in any case, it will be most excellent to finally get Bill and Ted back together in another all-new adventure.

The video of Reeves and Winter speaking with the graduating students of SDHS comes to us from catharine1967 on YouTube.