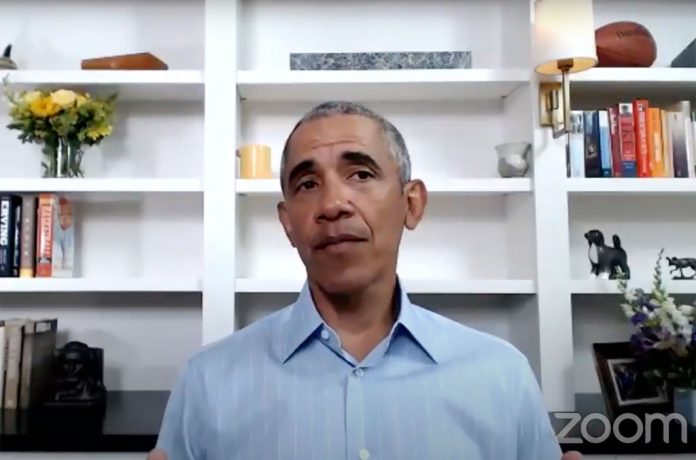 During his speech, Obama expressed how he and his wife former First Lady Michelle “are committed to the fight of a more just nation in memory of your sons and daughters,” he said, aiming at the families of George Floyd, Breonna Taylor, Ahmaud Arbery, Tony McDade and more Black people who died over the last few months due to racist murders.

He also celebrated the younger generation for leading the Black Lives Matter movement by tapping into their voices. “When sometimes I feel despair, I just see what’s happening with young people all across the country and the talent and the voice and the sophistication that they’re displaying and it makes me feel optimistic,” Obama said.

Diddy, The Knocks, Michelle Williams and more artists were certainly optimistic to hear from the nation’s former leader again, telling their Twitter followers to tune in to the town hall by posting links. The EDM duo posted a comic that flashed Batman’s Bat-Signal for Obama to come to the rescue. Like The Knocks, Lalah Hathaway referred to Obama as “my president,” but Lil Jon described him differently.

“He’s like that fav cousin that went away to college that you never see or talk to anymore,” he tweeted in response to DJ Ross One, who originally wrote, “Does Obama know how much it would help us all if he’d just leave that camera on in his office and check in a couple times a day to say hi?”

Check out the musicians’ reactions to Obama’s town hall, as well as the live stream video, below.

Does Obama know how much it would help us all if he’d just leave that camera on in his office and check in a couple times a day to say hi?

My President is speaking

AMC Tries to Raise $500M as a Lifeline to Avoid Bankruptcy, But Will It...