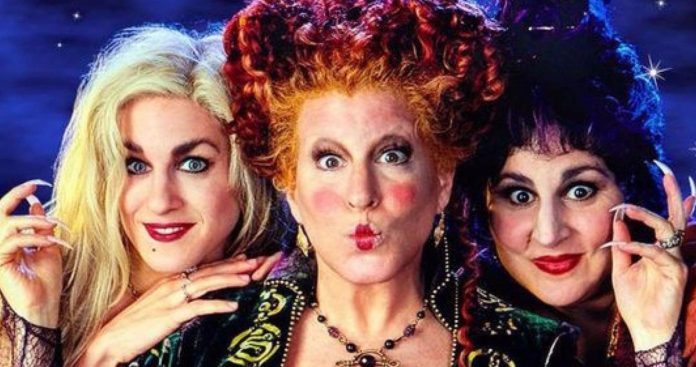 Sarah Jessica Parker says that original cast is ready for Hocus Pocus 2. Parker, Bette Midler, and Kathy Najimy starred in the iconic first installment. A sequel has been in the works for years now, but it remains unclear who will be taking on the starring roles this time around. A Disney Channel movie was talked about in 2014, but that came and went. In October 2019, it was revealed that a sequel was moving forward on the Disney+ streaming service.

Hocus Pocus was not a big screen success upon its arrival in 1993. It was a box office bomb, but it quickly became a cult classic when it was released on home video. Fans of the original have been asking about Hocus Pocus 2 for nearly 30 years and now it’s finally going to happen. But who is going to star in it? Sarah Jessica Parker had this to say in a new interview.

“I think that is something that Bette, Kathy, and I are very hospitable to the idea and I think for a long time people had been talking about it as if people were moving forward with it in a real way but we were unaware of it. I think now we have gotten to the point where we all have agreed publicly to the right people that ‘Yes, that would be a very, very fun idea.’ So we’ll see what the future holds.”

Sarah Jessica Parker seems like she may know a little more than she has been letting on, just by the sound of her voice. However, she’s probably not able to talk about anything pertaining to Hocus Pocus 2 until everything is solidified. Last October, Bette Midler talked about returning. She explains.

“Oh my goodness me. Oh I hope they get to me before I’m a corpse. We wanna fly again. I hope Disney+ is a big success and I hope we get to do it, because [Winifred Sanderson] is, of course, one of my favorite characters. I mean she’s, in the zeitgeist. I have met people ⁠- I’ve met grownup people, like 40-year-olds, 50-year-olds ⁠- who say, ‘Oh I remember that! Hocus Pocus! I was brought up on that.’ It’s so mortifying ’cause I still look 35.”

While Bette Midler and Sarah Jessica Parker seem more than willing to return for Hocus Pocus 2, Kathy Najimy was recently a little more realistic about the situation. “I heard about it online the same time as [everyone else],” she says. Najimy went on to say, “Sarah [Jessica Parker] and Bette and I all have a million projects and things that we’re into, so I don’t know if they’re gonna offer us [roles].”

The studio would have to be out of their minds not to invite Sarah Jessica Parker, Bette Midler, and Kathy Najimy back for Hocus Pocus 2. Doug Jones has previously expressed interest in reprising his role of Billy Butcherson in a possible sequel, so that could happen too. For now, we’ll just have to wait and see. You can listen to the interview with Sarah Jessica Parker below, thanks to the Radio Andy YouTube

The Game Must Pay $7M in Damages After Losing Bid for New Sexual Assault...

2019 Latin Grammys Predictions: Who Should & Will Win