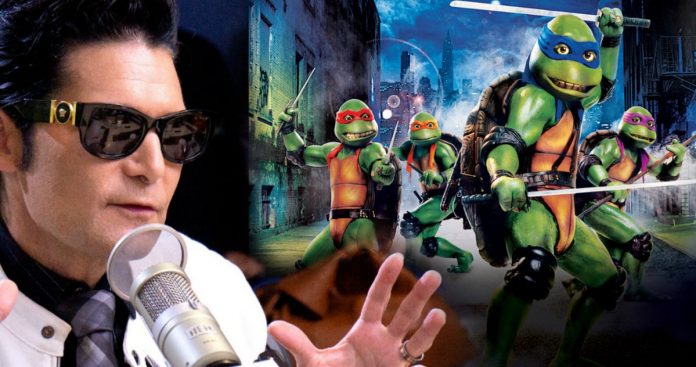 Corey Feldman had a special message for Teenage Mutant Ninja Turtles fans ahead of the highly anticipated reunion over the weekend. Feldman voiced Donatello in the iconic movie, along with the third installment. He even voiced the Slash character in the 2012 TV series. The actor revealed that he still gets stopped and asked about playing the character on the big screen to this day, though he doesn’t like to take all of the credit.

It’s been 30 years since Teenage Mutant Ninja Turtles first hit the big screen. A virtual reunion was held in honor of the event and Corey Feldman provided a message to the fans before it took place. While he is known as the voice of Donatello, he wanted people to know that most of the credit should go to the actors who had to get inside the sweaty suits to perform the stunts. A lot of people think that Feldman is actually in the Donatello suit, but he only provided the voice, which he teases in his TMNT reunion video.

Leif Tilden and Ernie Reyes Jr. were the actors who played Donatello in Teenage Mutant Ninja Turtles. Reyes Jr. took on the stunt work, while a third person, David Rudman, worked as a facial puppeteer, which means, along with Corey Feldman, it took four people to bring Donnie to life on the big screen. David Forman played Leonardo in the movie with Martin P. Robinson taking over the facial work. Josh Pais (Pais also provided the voice) and Kenn Troum brought Raphael to life with the help of David Greenaway. As for Michelangelo, Michelan Sisti and Mak Wilson brought the hard partying turtle to life.

Teenage Mutant Ninja Turtles hit movie theaters in March 1990, fueled by the success of the animated series, which it drew from. The movie wasn’t exactly a hit with critics, but it was with the fans, who were excited to see the animated characters come to life on the big screen. It made over $200 million globally, making it the ninth highest-grossing movie of 1990 and the highest grossing independent movie up to that point in time. You can check out Corey Feldman’s special 30th anniversary message to Teenage Mutant Ninja Turtles fans above, thanks to the TMNT Movie 1990 YouTube channel.