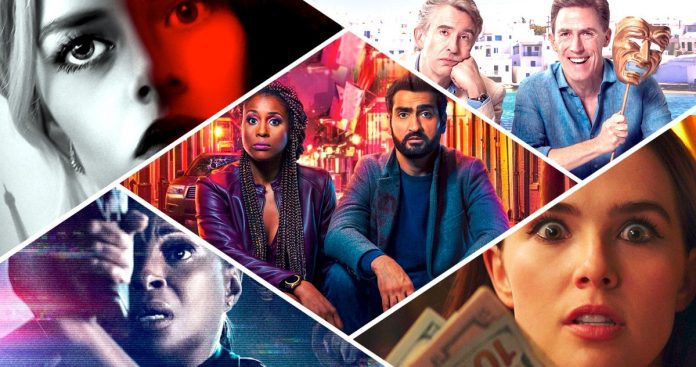 Movie theaters may be closed down, but there are still new movies arriving this week for people to enjoy. A wide variety of new releases are coming down the pipeline to stream this weekend, be it through major streaming services, digital purchases or rentals. Whatever the case, there is no shortage of options for those looking for something new to watch.

This week’s offerings run the gamut. We have a major studio comedy making its debut on Netflix, a unique horror thriller, Simon Pegg like we’ve never seen him before and a couple of recent hits that will finally arrive on streaming services. Here are this week’s streaming selections.

RELATED: Uncensored Back to the Future 2 Is Now on Netflix, Creators Want Edited Version Destroyed

This is quite easily the most high-profile new release of the week. The Lovebirds was originally set to debut at SXSW back in March, before the event was shut down. Paramount Pictures seemingly had high hopes for the comedy, which sees Kumail Nanjiani and Issa Rae in the lead roles. Michael Showalter, who previously collaborated with Nanjiani on the Oscar-nominated The Big Sick, is in the director’s chair. The comedy was sold to Netflix in a splashy deal that pleased both sides, since Paramount couldn’t put it out in theaters right now, and it also gave the streaming service a flashy title to host exclusively. The movie centers on a couple who unwittingly find themselves tangled up in a bizarre murder mystery. Critics have been kind to this one so far, as it holds an 81 percent approval rating on Rotten Tomatoes. It is streaming on Netflix starting May 22.

Available on digital platforms now, we have a new horror/thriller that stars Mary J. Blige and Nat Wolff. Directed by Malik Booth, Body Cam centers on a group of LAPD officers who must attempt to cover up the murder of a black youth by getting rid of their body cam video footage. However, they end up being haunted by an evil spirit. Critics have been a bit mixed on this one out of the gate, but it could be an option for horror fans looking for something new.

Actress Zoey Deutch headlines Buffaloed, which is available now via digital platforms. Directed by Tanya Wexler, the comedy centers on a woman who is desperate to escape her life in Buffalo, New York and, as a result, finds her way to becoming a debt collector. This one kind of slipped under the radar earlier this year but was received reasonably well by critics, as it currently holds a 77 percent approval rating on Rotten Tomatoes.

Also of note this week is Inheritance. This is the latest from director Vaughn Stein, who previously directed The Terminal but has worked as a second unit director on a number of big movies in the past. Available digitally on May 22, the movie stars Lily Collins and Simon Pegg, who underwent quite the physical transformation for his role. Pegg also is playing against type here, as he is deadly serious and in no way meant to be the comedic release. It centers on the patriarch of a wealthy and powerful family who dies very suddenly. This leaves his wife and daughter to pick up the pieces. A shocking secret inheritance is revealed that threatens to destroy their lives.

The Last Moment of Clarity – Digital

The Last Moment of Clarity, which arrives digitally now, is headlined by Samara Weaving. The up-and-coming actress is set to star in Bill and Ted Face the Music later this year but first, she has this thriller on her schedule. The movie centers on Sam who, after his girlfriend is murdered by European mobsters, flees to Paris to hide. Years later, he encounters a woman in a movie who he’s certain is Georgia. He then heads to L.A. to investigate where he encounters Kat, who offers to help him. Colin Krisel and James Krisel direct.

The Trip to Greece – Digital

Here we have what could easily be the best option for those in search of pure comedy this week. The Trip to Greece once again reunites Steve Coogan and Rob Brydon for another adventure that will bring an end to their The Trip series. The movies kicked off a decade ago with the first entry and it inspired several sequels. This time around, the two head to Greece to scope out restaurants, hotels and famous landmarks. Director Michael Winterbottom is back behind the camera and, based on the early critical reaction, this latest addition to the series hasn’t lost any steam. It is available on digital platforms starting May 22.

Once Were Brothers – Digital

For lovers of classic rock, The Band is truly legendary. Once Were Brothers: Robbie Robertson and the Band is a new documentary that chronicles the iconic group, tracing their days backing up Bob Dylan to becoming a massively influential group in their own right. The doc will be available digitally starting May 22. Daniel Roher is in the director’s chair.

One of last year’s biggest critical hits is finally making its way to streaming. Starting on May 22, Rocketman will arrive on both Hulu and Amazone Prime Video. The Elton John biopic, which stars Taron Egerton as the music icon, went on to win the Oscar for Best Original Song for I’m Gonna Love Me Again. The movie serves as a non-traditional biopic, chronicling the star’s rise to fame through choreographed musical numbers recounted by the singer through flashbacks. Dexter Fletcher is in the director’s chair.

The Painter and the Thief – Hulu

For those in the mood for a documentary, The Painter and the Thief will be debuting on Hulu on May 22. Directed by Benjamin Ree, it centers on Czech artist Barbora Kysilkova who develops an unlikely friendship with a man who stole two of her paintings. For what it may be worth, this one currently has an unblemished 100 percent approval rating on Rotten Tomatoes, so it seems hard to go wrong here.

Ready or Not – HBO

One of the most critically-heralded horror movies of 2019 is making its way to HBO on May 23. Ready or Not, directed by Matt Bettinelli-Olpin and Tyler Gillett, was a lowkey box office hit and also stars Samara Weaving. In it, she plays Grace, who marries the man of her dreams at their luxurious estate. There is a catch, however, as she must hide from midnight until dawn in what seems like a harmless game, at least at first. But Grace soon realizes that her new in-laws are trying to hunt her down with guns, crossbows and other weapons. She must desperately try to survive the night by any means necessary.

Here we have one for the horror crowd that stars Elijah Wood in the leading role. Come to Daddy, which begins streaming on Amazon Prime Video on May 23, is the latest from director Ant Timpson. The movie sees a privileged man-child who arrives at the beautiful, isolated coastal cabin that belonged to his estranged father. They haven’t seen one another in 30 years. He quickly comes to find that not only is his dad a jerk, but he also has a secret past that is rushing to catch up with him.

Shah Rukh Khan And Gauri Are ‘Squeezing Memories Into One Frame’ With Aryan, AbRam...