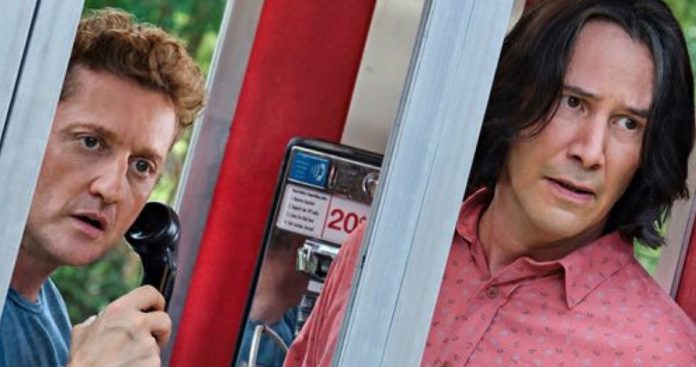 Given the state of the movie industry, fans are wondering where and when exactly we’ll be able to watch Bill & Ted Face the Music, and star Alex Winter is promising a major update coming soon. With movies like Trolls World Tour and Scoob! finding great financial success by releasing directly on VOD, the question has been lingering as to whether the third Bill & Ted movie will also go this route, or if it will instead push back its release date for a proper premiere in theaters. Still, at this time, nothing concrete has been confirmed by the studio or the filmmakers.

Due to the speculation, the rumors of Bill & Ted Face the Music made their way to Alex Winter, who responded directly to a fan asking about the possibility with a post on Twitter. “Hey, thanks for asking. Everything is great in BT3 land,” Winter says of what’s happening behind the scenes of the movie. He adds: “The cut is almost done and looks fantastic. Teasers and trailers are ready to go. Like every movie slated for this summer we had to stop and reorganize due to [movie theater shutdowns]. Teaser coming in a few weeks, news on release soon!”

As Winter can’t yet say specifically if the third Bill & Ted will premiere on PVOD or if it will later play in theaters, chances are that decision is still being discussed by the producers and the studio. It’s definitely not an easy choice, as each decision would have their advantages. After all, we haven’t seen Bill & Ted in theaters since Bill & Ted’s Bogus Journey was released in 1991, and it would be a wonderful thing to see their return on the big screen as well. Still, one can’t deny that people need the kind of charm and humor brought by these two characters now more than ever, and an early release on VOD would literally make millions of people happy.

Starring Winter as Bill alongside Keanu Reeves as Ted, Bill & Ted Face the Music serves as a direct sequel to the previous Bill & Ted movies. This time, the Wyld Stallyns face their most difficult challenge yet when the two middle-aged rockers are forced to create a master song in just 78 minutes in order to save the universe. Also appearing in the movie to reprise his role from Bogus Journey is William Sadler as Death, and the sequel will also introduce Brigette Lundy-Paine and Samara Weaving as Bill and Ted’s daughters, nicknamed “Little Bill” and “Little Ted.”

In any case, it’s good to know that a teaser is coming soon, and that we should finally find out one way or the other whether Bill & Ted Face the Music will keep its plan to premiere in theaters or if it will get a VOD premiere. Perhaps that decision might depend upon what happens with movie theaters slowly starting to reopen this summer and how that affects the movie business. As of now, the official premiere date set for the sequel is Aug. 21, 2020. This news comes to us from Alex Winter on Twitter.

Nicki Minaj Talks ‘Married Life’ & Being a Female in the Rap World With...