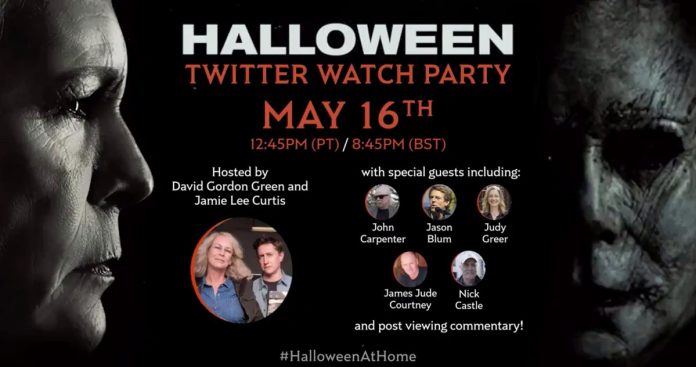 The creative team behind Halloween 2018 is getting together to kick off Universal’s first Saturday Twitter Watch Party Series. Jamie Lee Curtis, John Carpenter, David Gordon Green, Jason Blum, Judy Greer, James Jude Courtney, and Nick Castle will all be on hand to tweet along with the movie and answer fan questions. The event is all set to kick off tomorrow afternoon, starting at 12:45pm PT / 3:45pm ET / 8:45pm BST. All horror fans have to do is make sure they’re following the aforementioned team above and have a copy of the movie to watch along.

As for specifics on how the whole Halloween 18 live event is going to go down, Jamie Lee Curtis recently gave the details out on social media. It seems like it will be pretty standard when compared to the other live tweeting events that have taken place over the past several weeks. However, this specific event has John Carpenter attached, so it blows them all out of the water. You can read Curtis’ directions below.

“Halloween people & non Halloween people… When we go live on Saturday we are all going to pause the movie on the Universal Pictures logo and when we say NOW we will all hit play at that moment and hopefully we will all be fairly in sync.”

With so many key creative members from Halloween 2018 on board, there could very well be some exciting Halloween Kills news shared during the event. The sequel’s co-writer Scott Teems recently updated horror fans with what they can expect when the movie hits theaters. In simpler terms, Teems thinks that fans of the 2018 installment are really going to enjoy what they have put together for the second installment.

Specifically, Scott Teems says Halloween Kills is, “like the first one on steroids, I guess. It really is the bigger, badder, meaner version of the first one.” That sounds pretty promising, even for horror devotees who weren’t really into the last installment. Whatever the case may be, it has the blessing and involvement of John Carpenter, and that’s all that really matters when it comes down to it. Additionally, he’s working on a new score for the sequel, which is also big news.

The Halloween 2018 edition of Universal’s Saturday Twitter Watch Party Series kicks of tomorrow, Saturday, May 16th. Horror fans from all over the world should really have no problem with the time that was chosen since it won’t be too late. Regardless, what does anybody really have to do tomorrow? It’s not like Saturdays are really a thing anymore when everyday could technically be called an indoor Saturday or Sunday. Thankfully, studios and entertainers have been going out of their way to keep people from going too crazy by organizing events like this. You can get all of the specific details about the screening below, thanks to the official Halloween Kills Twitter account.

The Rise of Skywalker Concept Art Reveals Space Wolves and a New Look for...