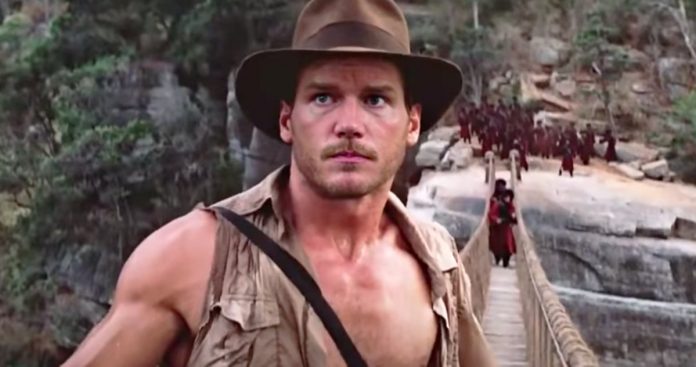 Though Harrison Ford is returning for an as-yet-untitled fifth movie in the Indiana Jones franchise, one fan has taken the liberty of imagining what things would look like should the part be recast with Guardians of the Galaxy star Chris Pratt.

In a new deepfake video, fans can see what things would look like should Chris Pratt ever don the famous wide-brimmed sable fedora. Footage from the first three Indiana Jones movies, Raiders of the Lost Ark, Indiana Jones and the Temple of Doom, and Indiana Jones and the Last Crusade, has been manipulated to superimpose Pratt’s face onto Ford’s body, and though the character continues to speak with Ford’s voice, the footage still gives viewers a great idea of what Pratt would look like in the iconic role.

With Harrison Ford now nearly 80 years old, fans of the whip-wielding archeologist have been speculating as to who could take over the role for years, with the ever-charming Pratt usually topping most people’s lists. The Marvel star has already proven time and again his natural ability to play witty, roguish characters, with the likes of Guardians of the Galaxy’s Star-Lord and Jurassic World’s velociraptor training Owen Grady both baring many similarities to adventurous professor of archaeology.

While seeing Chris Pratt as Indiana Jones might be a little bit of fun, recasting the role would unlikely go over well with fans. Response to the recasting of one of Ford’s other iconic roles, that of Han Solo in the Star Wars franchise, was met with much criticism and this would no doubt also be the case where Indiana Jones is concerned. More so, while Ford approved of Alden Ehrenreich playing Han Solo in Solo: A Star Wars Story, Ford has stated that he does not ever want Indy to be recast. This could well be because Ford has never been particularly passionate about Star Wars, but regardless, his opinion on the matter makes recasting even less likely.

Thankfully for Ford and fans, that does not look to be happening anytime soon, and moviegoers will get to see Indiana Jones back up on the big screen in just a few years. Indiana Jones 5 is coming in 2022 after numerous delays, with this fifth movie continuing the storyline that began in 2008’s Indiana Jones and the Kingdom of the Crystal Skull. However, Shia LaBeouf, who was introduced as Indiana Jones’ motorcycle-riding greaser son Mutt, will reportedly not be returning. Story details beyond that are being kept under wraps, but it’s been confirmed that Lucas will not be involved, and Indy won’t be killed off in the sequel. Indiana Jones 5 hit a slight snag when Spielberg dropped out of the director’s chair, but James Mangold is expected to take his place.

Speaking about the upcoming sequel, Ford has said that the script is “very good” and will show some “new developments in [Indiana Jones’] life, his relationship”, whilst also resolving “part of his history”.

This comes to us courtesy of Shamook.

Film Fanatic. Movie Maniac. Cockney Critic. Asserting his opinion wherever he goes, whether it is warranted or not.

Our Lady of Tears Movie Based on The Haunting of Girlstown Article Is Coming...

Here’s What Elton John Thought About The Weeknd’s Use of ‘Your Song’ on ‘Scared...

Ali Gatie – What If I Told You That I Love You (Official Music...