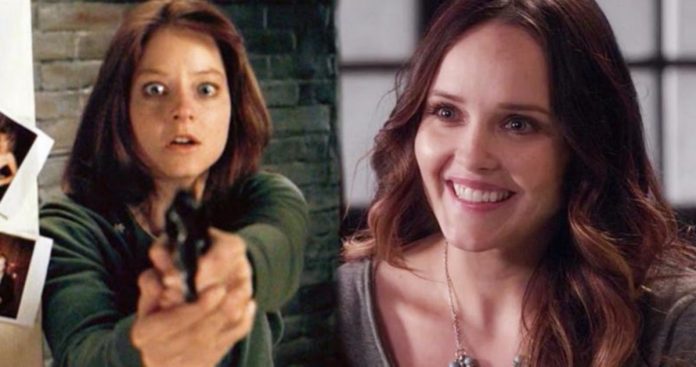 Clarice Starling is officially heading to the small screen, as CBS has announced a series pick-up order for the Silence of the Lambs character’s own spin-off series. Previously, it had been reported that the network had ordered a pilot for a TV series serving as a sequel to The Silence of the Lambs, following the Clarice Starling character after her ordeal with cannibalistic doctor Hannibal Lecter. Apparently, the powers that be at CBS must have been impressed with what they saw from the pilot, as the network has gone ahead and picked up Clarice with plans to debut the show during the 2020-21 broadcast season.

Clarice will be taking place in the past, as the series is set in the year 1993 to establish the timeline as six months after the events of The Silence of the Lambs. Written by executive producers Alex Kurtzman and Jenny Lumet, the series will follow Rebecca Breeds (Pretty Little Liars) as Clarice Starling, delving into the “untold personal story” of the character as she pursues other serial killers and sexual predators in the Washington, D.C. area. The series is also said to explore how something about Clarice draws some of the world’s most reprehensible criminals to her, which includes diving into the untold story of Clarice’s childhood and the “burden of family secrets that have haunted her throughout her life.”

While the story of Hannibal Lecter has been explored in Bryan Fuller’s popular television series Hannibal, Clarice will mark the first time Clarice Starling has appeared on the small screen. Though Fuller had intended to bring Clarice into the series at some point, the show came to an end before he had the chance to make it happen. For his part, Fuller has said Ellen Page would have been his ideal casting for the part. In 2012, the Lifetime network also began development on a Clarice TV series for the network in collaboration with MGM, but for whatever reason, the project fizzled before it got off the ground.

In addition to Clarice, CBS has also ordered two other shows to be included in this fall’s television season. One project, The Equalizer, serves as a reboot of the 1980s drama series of the same name, this time featruing Queen Latifah in the lead role. The series will follow Latifah’s character using her “mysterious background and extensive skills to help those with nowhere else to turn.” Meanwhile, CBS has also ordered a new comedy series from The Big Bang Theory and Two and a Half Men creator Chuck Lorre. Called B Positive, the comedy will star Thomas Middleditch (Silicon Valley) as a newly divorced father looking for a kidney donor. Annaleigh Ashford (Masters of Sex) also stars.

Along with Breeds in the lead role, Clarice will also include Michael Cudlitz (The Walking Dead), Kal Penn (Harold and Kumar Go to White Castle), and Nick Sandow (Orange Is the New Black) as major characters. While it may initially feel strange that Dr. Lecter will have no presence in Clarice, the character certainly has the potential to carry a series of her own, so let’s hope the series does the 1991 movie and original novel series proud. This news comes to us from The Hollywood Reporter.

Topics: Silence of the Lambs

U.S. Box Office Expected to Plunge 50% in 2020 Due to Theater Closures