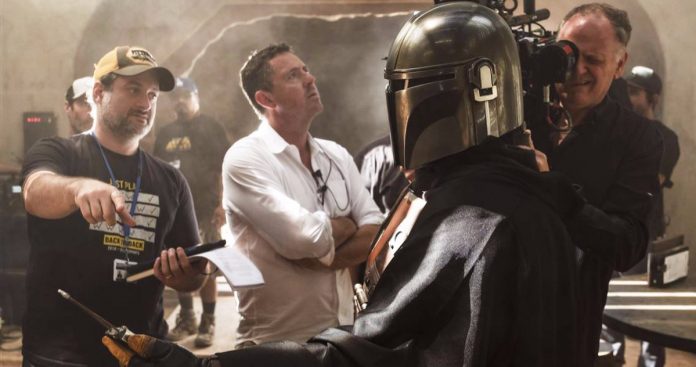 Dave Filoni isn’t worried about Star Wars fan expectations or possible backlash. The director/writer just wrapped up The Clone Wars season 7 and has The Mandalorian season 2 on the way. With the animated series done, Filoni can breathe a sigh of relief. Bringing the fan-favorite show back was only half of the battle since wrapping up the story was always going to be the real challenge. So far, the fans seem to be satisfied with what Filoni and crew were able to pull off.

The Mandalorian season 2 is coming to Disney+ in October of this year. Dave Filoni and Jon Favreau were able to work under the radar for the first season and didn’t really have to worry about Star Wars fan expectations because nobody really knew what was going on. To have the show come out, and become a massive hit after only one episode, was both a blessing and a curse for Filoni and Favreau. With that being said, it doesn’t seem like the fan expectations are a part of the creative process. Filoni explains.

“I don’t really ever think of it in those terms. George and I, we never really talked in those terms as far as what the fans would allow. It was more his experiences making the films and more his sensibilities that we always discussed. Ultimately, when it comes down to it, as the storyteller you have to tell a story that you like and hope other people like it too. I think that there’s enough shared sensibilities of what we all liked about Star Wars as far as this being an adventure, it’s fun, there’s a great deal of tension and mythology, but you know, everyone can come at it from a different point of view.”

Dave Filoni is a massive Star Wars fan, but it seems like he is able to separate that aspect from the creative side of things. The Mandalorian has a lot of what some would call “fan service,” but it’s done in a tasteful way and hasn’t really impacted the storyline thus far. All of the years of working with George Lucas have been a major benefit for Filoni when plotting out stories and character arcs. He had this to say when discussing fan expectations and creating engaging stories.

“Working with George I would be able to watch firsthand decisions being made and instincts he had, and I’ve tried the best I can to replicate that, but ultimately as a fan, I put these stories in the context that I like. I always felt if you’re just chasing what fans are going to like or not like, I don’t think you’ll ever get done. And really early on when I worked here, when I first started on Clone Wars, I thought, if I can’t make this show in a way that’s natural to me, that George likes, then I probably shouldn’t be doing it. I would be wrong for it, and that would be fine, but I had to take my crack at doing it off of what he taught me and see if it worked, and so far so good. Fifteen years later, I’m still here, so I guess I get it right most of the time, I hope.”

From watching the debut episode of Disney Gallery: The Mandalorian, it’s easy to see how much passion Dave Filoni has for the Star Wars universe and how much others rely on him to ultimately steer the ship. All of the directors who worked on The Mandalorian season 1 have nothing but great things to say about working with him as they attempt to steal some of his insight at the same time. There are already massive expectations set for season 2 as everybody wonders if it will be able to stand up to the first season.

With Baby Yoda, aka the Child, on board, The Mandalorian season 2 should be just fine in terms of people tuning in. But will the story be as satisfying and surprising as the first season? That is unknown at the moment. Whatever the case may be, Dave Filoni isn’t too worried about it when all is said and done. He will continue to work with George Lucas to deliver something that Star Wars fans didn’t even know they wanted. The interview with Dave Filoni was originally conducted by Deadline.