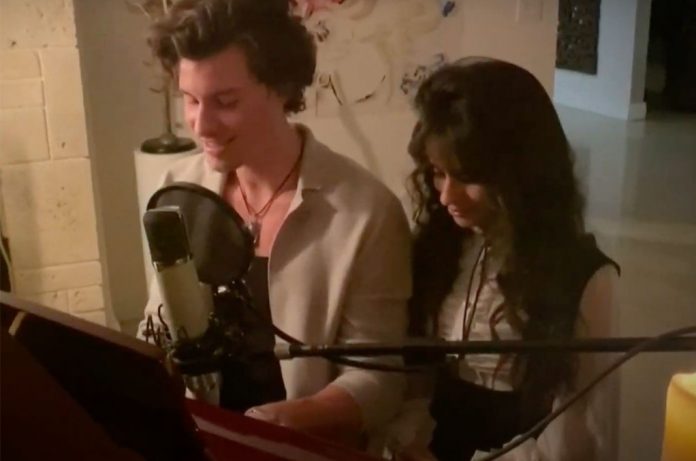 We might be in the middle of a pandemic but a little thing like a global health crisis can’t stop the slime. On Saturday (May 2), the Nickelodeon Kids’ Choice Awards took place with Victoria Justice hosting a remote evening of blimps, winners and green goo.

From showers to SpongeBob, these were the top seven moments of Nick Kids’ Choice Awards: Celebrate Together.

Shawn Mendes (winner of favorite male artist) showed up with Camila Cabello to accept the favorite music collaboration award for their duet “Señorita.” “I’ve literally watched the Kids’ Choice Awards for years and I wish I could get slimed!” Cabello said from quarantine with Mendes. “We’re gonna make organic slime right now and slime ourselves.” Share the recipe, CC. We’re ready.

Host Victoria Justice announced that Nickelodeon was donating a million dollars to No Kid Hungry to help in these difficult times. Which is awesome — and even better that she delivered the news holding a sweet lil pup. Respect.

Frozen in the Shower

Kristen Bell, decked out in costume Anna realness, appeared during the broadcast alongside dolls of various Frozen 2 characters. As did Josh Gad, who walked out of his bathroom in a pink shower cap to accept his blimp. As Olaf’s human voice put it, “This is the closest I’m gonna get to air transportation right now.”

LeBron James, his beard in full effect, showed up to accept the award for favorite male sports star. “You guys are amazing, this has always been one of the best shows to be a part of. Stay safe and healthy,” he said.

JoJo Siwa, who hopped into the pool after winning a blimp, held nothing back during the KCAs, not just dousing herself in slime but brushing her teeth with the iconic Nickelodeon slime. You think that’s nothing? Okay, do it yourself.

The voices of SpongeBob SquarePants and Patrick Star (Tom Kenny and Bill Fagerbakke, respectively) appeared to accept the award for favorite animated series, and watching the real-life humans adopting their cartoon voices on camera was a total delight. “We’re in this together!” said Kenny in character, before adding, “But Squidward is in this alone.”

Victoria Justice shouted out former Victorious castmate Ariana Grande, who won the favorite female music star award. “I’m very appreciative. Nickelodeon will always hold such a tremendous place in my heart not just for Victorious and Sam and Cat and the years I spent working with them. But also just for SpongeBob, you know? I’m always very honored.” Agreed. Truly, we are all lucky to exist in the same timeline as SpongeBob SquarePants.

Spider-Man 3 Shoot Rumored to Be Delayed

Lana Del Rey Says Her Next Album Will Arrive Sept. 5, Lashes Out at...

Kevin Parker, Courtney Barnett, The Wiggles And More Set for ‘Music From The Home...