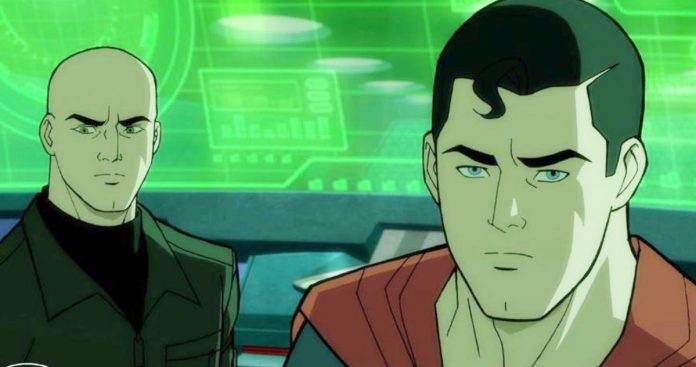 Warner Bros. has revealed the first look at the animated Superman: Man of Tomorrow movie. Additionally, they have announced that Zachary Quinto and Darren Criss are providing the voices for Lex Luthor and Clark Kent/Superman, respectively. It’s going to be a while before we see the Man of Steel on the big screen in a live-action situation, but Warner Bros. has DC fans covered in the animated projects department. Thankfully, Superman: Man of Tomorrow will be available later this summer for everybody waiting for some more Superman stories on the small screen.

Superman: Man of Tomorrow finds Clark Kent “working as an intern for the Daily Planet and learning on the job how to save the city of Metropolis.” The first-look image features Superman and Luthor standing side-by-side in front of a green monitor. It’s unclear what is going on since we’re looking at the image out of context. The new animated movie takes its name from a set of comics that started in 1995 and ran through 1999, consisting of 16 issues. Roger Stern, Louise Simonson, J.M. DeMatteis, Tom Grummett, and Ryan Sook all worked on the series throughout those four years.

In addition to Zachary Quinto and Darren Criss, Superman: Man of Tomorrow features Alexandra Daddario as Lois Lane. This isn’t Criss’ first time hanging out in the DC universe. He has appeared in The CW’s Supergirl and The Flash as the villainous Music Meister. As for Quinto, he played the murderous supervillain Sylar on NBC’s hit series Heroes. The rest of voice cast includes Ike Amadi as fellow superhero Martian Manhunter, Neil Flynn as Jonathan Kent, and Bellamy Young as Martha Kent.

Superman: Man of Tomorrow will also feature villains Lobo and Parasite. Lobo, “an intergalactic bounty hunter who calls himself ‘the Main Man,'” is voiced by Ryan Hurst. Parasite, aka Rudy Jones, is voiced by Brett Dalton. Parasite is “a monster who can literally suck the superpowers and life out of other beings. As such, he’s one of the few villains who can actually pose a threat to Superman.” The villain is one of the more popular in the comics, especially because he can do damage to the Man of Steel.

Superman: Man of Tomorrow is directed by Chris Palmer (Voltron: Legendary Defender) and written by Tim Sheridan (The Death of Superman), with Butch Lukic (Justice League, Batman Beyond) serving as supervising producer. Warner Bros. has not announced a concrete release date for the movie, but it will arrive at some point this summer. Now that we have our first-look image, it’s only a matter of time before the studio releases the first trailer. For now, we’ll just have to sit back and wait to hear what Darren Criss sounds like as Superman, along with what Zachary Quinto sounds like as Lex Luthor. You can check out the first image from Superman: Man of Tomorrow below, thanks to Entertainment Weekly.

The Mandalorian blasts off again with first season 2…

Apollonia Slams Sheila E.’s Prince Tribute: ‘You Are So Desperate to Be Relevant’