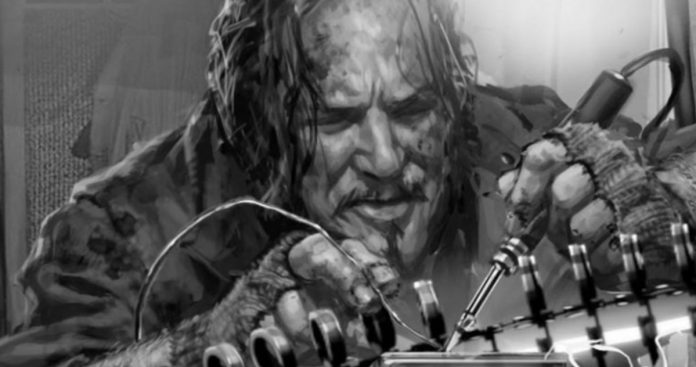 Newly released concept art from Marvel Studios’ Iron Man 2 finds Mickey Rourke’s Whiplash preparing a deadly electrified whip. Robert Downey Jr. and Jon Favreau kicked off the Marvel Cinematic Universe with the first Iron Man movie, which ended up earning over $600 million at the global box office. So, expectations were really high when it came time for the studio to release the sequel and it didn’t really reach the heights that it could have. Out of the three Iron Man movies, the second installment is often considered to be the weakest, though hardcore MCU fans still love it.

The Iron Man 2 concept art comes to us from Marvel Studios artist Ryan Meinerding. We are given a more in-depth look at Whiplash’s workshop in four images that Meinerding completed for the production. “Whiplash in his workshop. I worked on Tony’s workshop from the first Iron Man as well, so it was fun working with Jon and Mike Riva to figure out how to contrast the two,” says the artist in the caption for the images. Mickey Rourke is working on one of his electrified whips in the first image, with all kinds of equipment thrown around.

Ryan Meinerding also worked on Tony Stark’s workshop in the first Iron Man, so he was able to make the contrasts between the superhero’s version and the villain’s pretty distinct. Whiplash’s workshop is far from the state of the art technical facility that Stark is running. It’s small, it’s cramped, and it looks dirty and dingey. The two characters couldn’t come from more of a different place, which also fuels the villain’s hate towards Stark. While he is talented, he doesn’t have the tools that Stark has at his disposal.

In Iron Man 2, we don’t get to see a whole lot of Whiplash’s workshop. In the movie, we see more stories about the Stark family than anything else, so this concept art adds an extra dimension to what was eventually shown on the big screen. The bird cage with the picture of Iron Man in it is a nice addition and something that would have worked on the big screen, so it’s a bit strange that they left it out of the movie. However, the villain’s hate for the Stark family was known right from the start, so the bird cage could have been overkill.

Robert Downey Jr. set the groundwork for what would eventually become the Marvel Cinematic Universe. While the first Iron Man is praised for being one of the best movies out of the whole group, the final two installments were still working out the kinks, much like the Thor franchise. Whatever the case may be, all three movies are very important to the MCU, so it’s nice to see some extra details that could have been included in the movies through Ryan Meinerding’s concept art. You can check out a detailed look at Whiplash’s workshop below, thanks to Ryan Meinerding’s Instagram account.