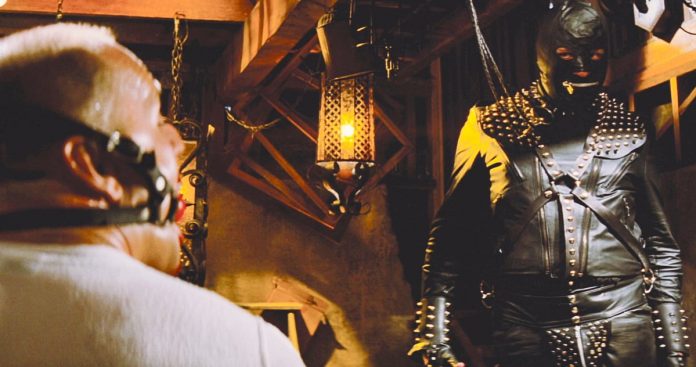 Pulp Fiction was released back in 1994, but fans still talk about the many unsolved mysteries left behind by the legendary movie. Many continue to wonder what exactly was inside Marcellus Wallace’s briefcase, while others are curious what the real story was with the man known as the Gimp. For the latter, that particular mystery has finally been solved as Tarantino has offered his storyline explanation for who this guy really is, as well as what ultimately became of him after his controversial scene.

In the movie, Marcellus Wallace (Ving Rhames) chases Butch Coolidge (Bruce Willis) into a gun shop where the two are taken captive by the owner and a friend. The duo proceed to sexually assault Marcellus, leaving another man clad entirely in leather bondage gear to keep watch over a tied-up Butch. Using his strength as a professional boxer, Butch escapes from his restraints, prompting the Gimp to cry out from behind his zipped mask. In response, Butch slugs the Gimp in the face, seemingly knocking the man unconscious to swing freely from his ropes. That would be the last we’d ever see of the Gimp in Tarantino’s movie universe, but all of these years later, Tarantino is finally filling in the blanks on this bizarre character’s story.

In an interview with Empire earlier this month, Tarantino fielded a variety of questions from fans. Seeing an opportunity to find out more about the character, one Pulp Fiction fan directly asked Tarantino to explain the Gimp’s backstory as well as “what happens to him” after Butch leaves the building. As it turns out, the answers to both of these questions are pretty depressing, as Tarantino says he always saw the Gimp as a subservient kidnapping victim who actually dies during his Pulp Fiction scene. From the interview:

“It doesn’t quite play this way in the movie, but in my mind when I wrote it, the Gimp’s dead. Butch knocked him out and then when he passed out he hung himself. In terms of backstory, he was like a hitchhiker or somebody that they picked up seven years ago, and they trained him so he’s the perfect victim.”

Going by Tarantino’s explanation, the Gimp may not have actually been a willing partner in the sexual shenanigans of gun shop owner Maynard (Duane Whitaker) and perverted security guard Zed (Peter Greene) – or, at least, things didn’t start that way. Apparently, these guys have been holding this poor fellow captive in bondage gear for nearly a decade, warping his brain into complete submission for his captors. If that wasn’t horrific enough, Tarantino is also suggesting that the man is actually dead in the scene, meaning he died just as he was about to taste freedom. Who knew the Gimp had one of the most tragic stories of Tarantino’s entire filmography?

It’s strange that Tarantino somehow found a way to make that shocking scene all the more disturbing with this new information about the Gimp. The filmmaker also divulged plenty of other interesting information in the interview as well, and it’s certainly worth a read for Tarantino fans. You can read more at Empire Online.

The Mandalorian Season 2 Is Locked In for October Premiere…

Movie of the Week