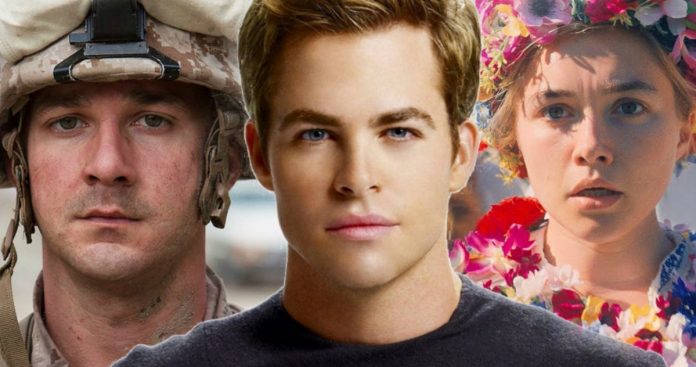 Florence Pugh, Shia LaBeouf, and Chris Pine are set to star in Olivia Wilde’s Don’t Worry Darling. Wilde is teaming up with New Line to finance and distribute her upcoming highly anticipated follow-up to last summer’s Booksmart. In addition to directing, Wilde will also co-star in the project, which was expected to begin production this spring. However, due to the world’s current state of affairs, the production has been postponed. It is unclear when work will commence.

Specific story details on Don’t Worry Darling are currently being kept under wraps. The psychological thriller is set in a 1950s utopian community focusing on a housewife, played by Florence Pugh, who “soon learns her life isn’t as idyllic as she believes.” It takes place in an isolated community in the California desert. No other details about the project have been revealed as of this writing. With that being said, New Line has marked the project as a top priority.

Katie Silberman, who co-wrote Booksmart, wrote the original script for Don’t Worry Darling from a story by Shane and Carey Van Dyke. With Olivia Wilde, Florence Pugh, Shia LaBeouf, and Chris Pine all on board, the movie will get a lot of attention. Pugh was just nominated for a supporting actress Academy Award and BAFTA Award for her performance as Amy March in Greta Gerwig’s Little Women. She’ll be seen next in Marvel Studios’ upcoming Black Widow standalone movie. The comic book movie was supposed to open in theaters on May 1st, but it has been pushed back to November of this year.

Chris Pine recently wrapped production on the action-thriller Violence of Action and will be seen next in Wonder Woman 1984. The actor is reprising his Steve Trevor role in the sequel, though comic book fans aren’t sure how he was able to return just yet since he died in the first installment. For now, it looks like Warner Bros. intends on releasing the highly anticipated sequel in August. As for Shia LaBeouf, he’s coming off the success of his autobiographical project Honey Boy, which he wrote and starred in. LaBeouf also received praise for his role in last year’s The Peanut Butter Falcon.

Olivia Wilde made her directorial debut with Booksmart last summer. The comedy was critically acclaimed and had modest box office success. She ended up winning Best First Feature Independent Spirit Award for the movie. She is currently also set to direct and executive produce the Searchlight feature Perfect, which is based on gymnast Kerri Strug’s journey to the 1996 Atlanta Olympic games. Catherine Hardwicke is executive producing Don’t Worry Darling, alongside Shane and Carey Van Dyke. Wilde and Silberman will produce along with Roy Lee and Miri Yoon of Vertigo Entertainment. Daria Cercek and Celia Khong will oversee the project for New Line. Deadline was the first to report the Don’t Worry Darling casting news.

Benee Performs ‘Superlonely’ With Her Dogs on ‘Fallon’: Watch

CinemaCon Is Canceled, You Know Why