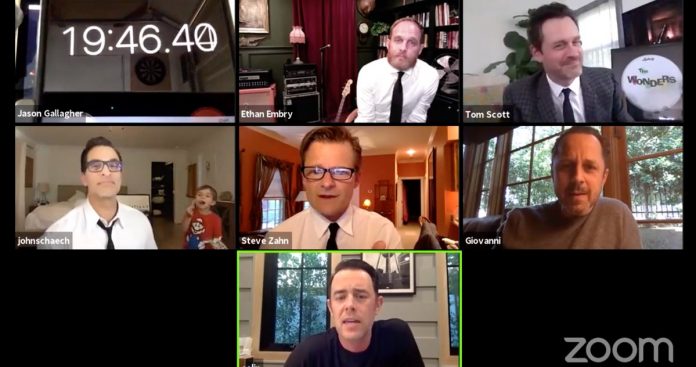 The Wonders from That Thing You Do! have reunited this week. Tom Everett Scott, Johnathon Schaech, Ethan Embry, and Steve Zahn discussed what Tom Hanks taught them before their live reunion, which takes place today, April 17th. The actors were all young when they were cast as the fictional band and Hanks was behind the camera for the first time. He was able to offer the whole cast some pretty solid advice that has stuck with them ever since.

Tom Everett Scott, Johnathon Schaech, Ethan Embry, and Steve Zahn are clearly having a lot of fun discussing That Thing You Do! after all of this time. It’s also clear that they had a lot fun making the movie with Tom Hanks. With that being said, it wasn’t always fun and games on the set. Zahn had this to say about a specific memory from that time.

Get notified when your movie theaters open back up!

We’ll let you know when your local theaters open so that you can start enjoying the cinemas once again.

RELATED: The Wonders from Tom Hanks’ That Thing You Do! Will Reunite for a Live Event

“I always remember this. We all showed up late. We got called into one of our trailers, and Tom was so nice. He sat us down and said, ‘That’s the last time that’ll ever happen.’… What he meant was: That was the last time that will ever happen in your career. I’m giving you some advice. Show up. Know your sh*t. Be cool Don’t be a jerk, all those things. He was really dad.”

The rest of The Wonders smiled and nodded in agreement with Steve Zahn’s memory of the situation. They also remembered shooting a particular scene in a department store where a crowd had amassed to see Tom Hanks. They were cheering and the production couldn’t continue with all of the noise, so the actor went outside and waved like Forrest Gump, which got everybody to quiet down. Tom Everett Scott says that particular incident was another lesson they all learned from the actor. He explains.

“He led by example. I’d see him interact with fans. If someone wanted him to list all the versions of shrimp he could cook from Forrest Gump, he’d do it. He’d play along. He knew fans love that stuff.”

Tom Everett Scott, Johnathon Schaech, Ethan Embry, Steve Zahn, and Liv Tyler are reuniting live on YouTube this afternoon (April 17th at 4pm PST/7pm EST) to take part in some That Thing You Do! commentary. Other special guests will stop by to join the fictional band and share their memories. The event was set up to bring awareness to MusiCares, which gives support to musicians and touring professionals who are currently out of work due to the current state of world affairs.

In addition, the That Thing You Do! live reunion special will pay tribute to the late Adam Schlesinger, who wrote the iconic theme song for the movie. Adam Schlesinger passed away on April 1st and the music/entertainment world has been mourning his loss ever since. While there’s a lot of sadness in the world right now, Tom Everett Scott, Johnathon Schaech, Ethan Embry, Steve Zahn, and Liv Tyler are hoping to offer some entertainment for a few hours to raise some spirits. You can check out the reunited Wonders interview below and then head over to the official Wonders YouTube channel to watch the live event.

Topics: That Thing You Do!

Director Jordan Peele Sets Up His Next Two Movies at Universal in a 5-Year...