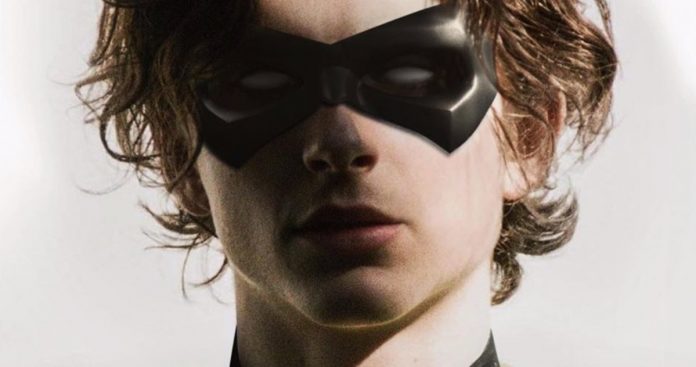 Some DC fans want to see Timothée Chalamet as Robin in The Batman, and some convincing fan art from Instagram digital artist Mizuri seals the deal for many. “I still think he’s the perfect [casting choice] for Dick Grayson next to Robert Pattinson’s Batman,” Mizuri explains in the caption of the photo. Meanwhile, the comments are filled with people on board with the idea, with one user noting, “Please if there is a God let this happen.” You can take a look at the fan art below.

While we can speculate all we want over who will be playing Robin in this new Batman universe from director Matt Reeves, there’s been no indication at this point that the character will have a role in the movie. Although Reeves has suggested The Batman won’t be an origin story, the movie will reportedly be following the early years of the Dark Knight, and it would seem a bit too soon for the titular superhero to bring a sidekick on board. Still, that doesn’t mean Robin can’t appear in some capacity in the movie, even as trapeze artist Dick Grayson in the years before he adopts his own superhero identity.

Many other cast remembers have officially been confirmed to appear in The Batman alongside Pattinson as Bruce Wayne. This includes Andy Serkis as the Wayne family butler, Alfred Pennyworth, and Jeffrey Wright as the new Commissioner James Gordon. Villains set to appear in the movie also include Zoe Kravitz as Catwoman, John Turturro as Carmine Falcone, Paul Dano as The Riddler, and Colin Farrell as Oswald “Penguin” Cobblepot. Reeves and Warner Bros. might have some surprises in store for fans as well, and there’s no telling who else from DC Comics might be showing up in The Batman.

As for Timothée Chalamet, time will tell if he ever lands the role of Dick Grayson, but fans of the actor can still look forward to seeing him in the new Dune movie. Just recently, a first look photo was revealed of Chalamet in the lead role of Paul Atreides, the role originally played by Kyle MacLachlan in the 1984 version from director David Lynch. Other cast members oining Chalamet in the new Dune include Dave Bautista, Rebecca Ferguson, Oscar Isaac, Zendaya, Josh Brolin, and Jason Momoa. The movie is currently in post-production and is scheduled to be released on Dec. 18, 2020.

The Batman is set to be released on June 25, 2021, but that premiere date could ultimately see a delay with production of the movie currently shut down. It remains unclear when filming will resume on the project. In any case, it’s going to be a while before we see the movie, so for now, it looks like fans will continue to contemplate just who or what they might see in The Batman. Perhaps we’ll be seeing a lot more interesting fan art for the movie as we continue through the year. The fan art of Chalamet as Robin shown above comes to us from Mizuri on Instagram.