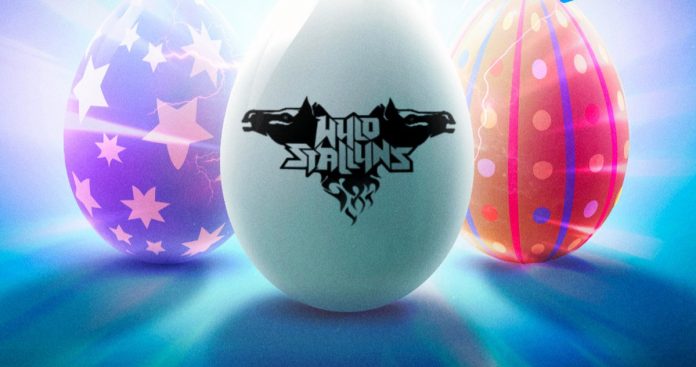 Even though most of Hollywood has closed shop, with all upcoming releases delayed, postponed or pushed back until 2021, Bill & Ted Face the Music is still on schedule to hit theaters this August. Hopefully the most excellent duo will make it on time. Today, in celebration of Easter, we get a new poster that is most Egg-Cellent.

Not only is this a cool way for Bill & Ted Face the Music to celebrate Easter, it’s also a clever nod back to Bill and Ted’s Bogus Journey. In their most heinous trip to hell, we got to see Ted ‘Theodore’ Logan tormented by the Easter Bunny for stealing his brother Deacon’s Easter basket way back in the 70s.

The Easter Bunny originally had a much bigger role in Bill & Ted’s Bogus Journey, with the monstrous rabbit appearing in the real world alongside Bill’s Grandma and Colonel Oats as they manifested to stop Bill and Ted from arriving at the battle of the bands. The scene was cut, and at the time, Keanu Reeves was quite vocal about his disappointment in seeing the Easter Bunny monster axed from the final cut.

Oddly enough, when Marvel comics did an adaptation of Bill & Ted’s Bogus Journey, which hit shelves several weeks before the movie was in theaters, they included these deleted scenes. And many fans expected to see the Easter Bunny show up along with Granny and Oats, and were also disappointed to see that the ending had changed.

With quite a few returning characters showing up in Bill and Ted Face the Music, there’s a chance that perhaps the Easter Bunny could return to wreck havoc on Ted’s life once again. But we’ll just have to wait and see.

In Bill & Ted Face The Music, A visitor from the future tells best friends Bill and Ted that one of their songs can save life as we know it and bring harmony to the universe. They will have exactly 78 minutes to create this song, racing through various parts of History with their families, old friends, famous musicians, and each other to complete the task.

Bill and Ted will be helped by their daughters Thea and Billie, played by Samara Weaving and Bridgette Lundy-Paine. Keanu Reeves and Alex Winter return as The Wyld Stallyns. William Sadler is back as The Grim Reaper. And Kid Cudi will also be getting in on the fun. You can check out the cool Easter egg poster for Bill & Ted Face The Music direct from the official Bill and Ted 3 Twitter.

Lana Del Rey Says Her Next Album Will Arrive Sept. 5, Lashes Out at...

Scarface, Now on Dialysis, Describes Coronavirus Battle: ‘I Was Inches Away From Death’