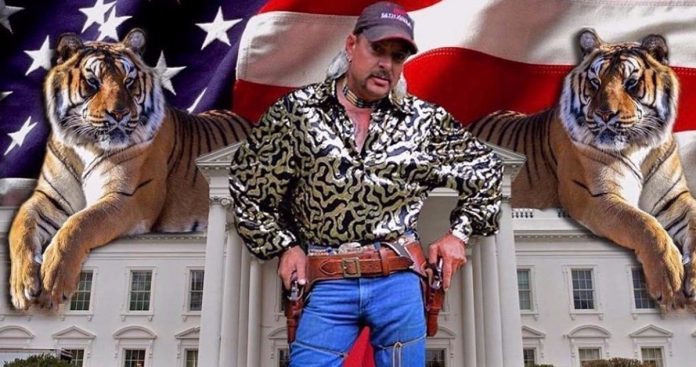 A 2016 documentary told Joe Exotic’s story way before Netflix dubbed him the Tiger King. The streaming service has launched Mr. Exotic into the stratosphere over the past three weeks. Everybody is stuck at home and watching Netflix, diving deep into a 7-episode docuseries about Exotic, along with his friends and rivals as they battle for the title of tiger king or queen. While Exotic certainly comes off as a larger-than-life flamboyant character, he is a little more reserved in the 2016 documentary.

Joe Exotic is currently spending 22 years in prison for various charges, with the main one involving hiring a hitman to kill rival Carole Baskin. The Life Exotic takes place well before all of that madness and seems to find Exotic before he truly lost the plot in life. He has made some pretty serious mistakes over the years, but this 2016 look at him shows that he was, at the very least, trying to run a competent zoo in tribute to his late brother. In other words, no matter how you feel about Exotic, this is a must-watch documentary to get a balance.

Everybody is waiting for the future of Tiger King. Jeff Lowe claims that a new episode is landing on Netflix this week after he revealed that he met with producers for more interviews. Producers/directors Eric Goode and Rebecca Chaiklin say that they have a ton of leftover footage and that the story is still unfolding, teasing that a second season could be in the cards. However, it took them nearly five years to complete. If they are going to release a sequel, they might have to let things unfold naturally, just like they did before, meaning they’ll have to play the long game.

A Florida sheriff has announced that they are reopening the investigation into the disappearance of Carole Baskin’s ex-husband Don Lewis. They are currently seeking leads from anyone who may have any information about Lewis’ mysterious disappearance back in 1997. Fans, and just about everybody who has seen Tiger King, is under the assumption that Baskin killed him and fed him to her tigers. Baskin has never been charged for the crime by law enforcement. So, this could very well end up turning into an even bigger story than the story of Joe Exotic.

The Life Exotic was directed by J.D. Thompson who borrowed $1,500 from his mother to get the project done. In the end, he didn’t even spend all of the money. Thompson even took over camera duties when is hired camera man wouldn’t get into the cage with the adult tigers. Until now, the documentary has not gotten very much attention, but that has all changed, thanks to Netflix’s Tiger King docuseries. While we all wait to see what happens with Jeff Lowe and Carole Baskin, you can check out 2016’s The Life Exotic documentary below, thanks to the Thompson Automatic YouTube channel. The top images comes from @TigerKingLords on Instagram.