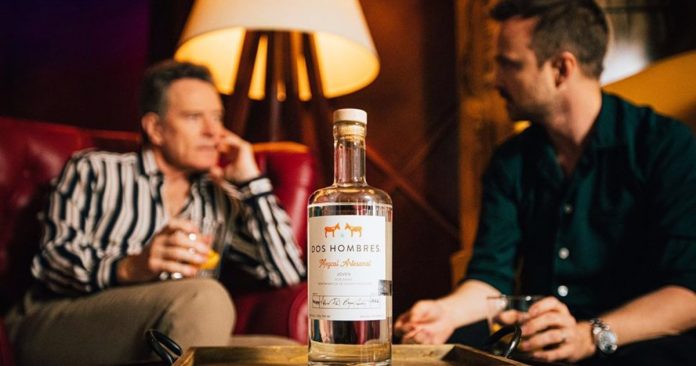 Breaking Bad stars and alcoholic beverage salesmen Bryan Cranston and Aaron Paul are lending a hand to out-of-work bartenders by donating a portion of their profits to Aviation Gin’s “Tip Your Bartenders” campaign. Very well-known for portraying methamphetamine cooks Walter White and Jesse Pinkman on the hit AMC drama, Cranston and Paul have since taken on a new trade by partnering up to start the Dos Hombres mezcal company last year. Taking the lead of Aviation Gin stake-owner Ryan Reynolds, the Breaking Bad actors recently announced on social media their intentions to help struggling bartenders who could really use the money.

Sharing a photo for identical posts on both of the actors’ official Instagram accounts, Cranston and Paul can be seen in the background having a drink with a bottle of Dos Hombres displayed prominently in the foreground. “Good idea [Ryan Reynolds], let’s all pitch in,” the caption reads, adding that Dos Hombres is “on board” with the Tip Your Bartenders campaign.

According to the post, Bryan Cranston and Aaron Paul are going to donate 30% of all proceeds from online orders starting now through May 1, and the two are encouraging other brands to do the same. “Whatever your choice of drink, let’s all raise a glass to our commitment to [flatten the curve]. Please drink responsibly with none of your closest friends… for now,” the actors state.

Donations will be made straight to the United States Bartender’s Guild, which will help bartenders displaced from work with an emergency assistance program. The initiative quickly picked up steam when Reynolds recently tweeted about the program on his official Twitter account, similarly using a photo of himself enjoying a glass and noting the donations to the USBG in the caption. “Until May 1st, for every bottle of Aviation ordered online, we’ll donate 30% of proceeds as a tip to your bartenders – who REALLY miss you btw,” Reynolds notes in the tweet, which was quick to capture the attention of Bryan Cranston and Aaron Paul.

This campaign to keep bartenders compensated is not the only charity we’ve seen recently from Reynolds. Last week, the Deadpool star and wife Blake Lively announced they’d donated a cool $1 million to be split between the food banks Feeding America and Food Banks Canada. Other celebrities have been chipping in to help out the most needy during these difficult times as well, which also includes The Terminator star Arnold Schwarzenegger. Days ago, Schwarzenegger revealed he had pledged another $1 million to the Frontline Responders Fund, which aims to supply our first responders with the materials they need to keep themselves protected and save lives.

After co-starring on Breaking Bad between 2008 and 2013, Cranston and Paul reunited on-screen to reprise their roles in the Netflix Original El Camino: A Breaking Bad Movie just last year. It’s awesome to see that outside of the dramatic television series, the two actors are using their powers for good. You can take a look at the social media post from Cranston and Paul below, courtesy of Bryan Cranston on Instagram.