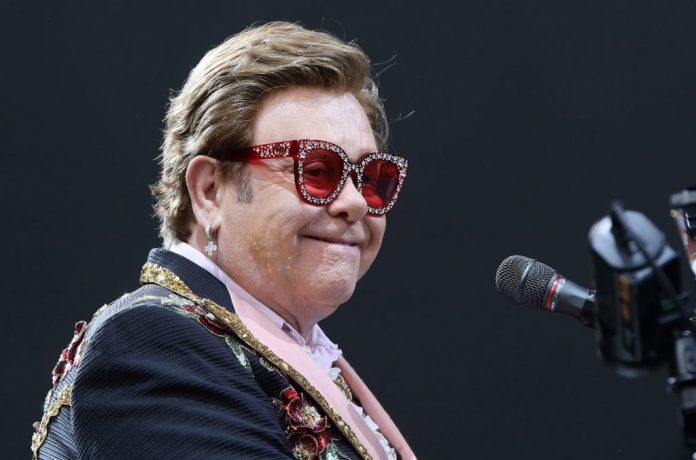 Apple Music’s Zane Lowe introduced a new daily interview series on Monday (March 23), during which artists will select an hour of music to reflect their current mood each day. The first guest, Elton John, chatted with Lowe about a wide range of topics including up-and-coming artists, his relationship with The Weeknd and staying positive as the coronavirus continues to spread.

“To be honest with you, it’s great to be able to spend this much time with my boys because normally I don’t, even though they’ve been on the road with us since November in Australia and New Zealand,” the icon said. “It’s, this is 24/7 with them and it’s fantastic. I mean I’m saying that after a week, check on me in about three weeks,” he joked.

“Well, you have to be positive and say, ‘An end will come to this.’ We don’t know when, but hopefully, you know, scientists have never been so busy now trying to find something that works, trying to find a vaccine. But that takes time,” he continued, before shouting out the medical professionals who are “doing all the hard work.”

“This is a different situation than anything that’s happened before. So you have to be very careful. Stick with your family,” he continued. “This is the time where people are going to spend more time with their families than they’ve ever done before. And so far, again, check with me in two weeks. I’m enjoying it so much because I don’t spend that much time with my family during the day and I’m loving every second of it. So cherish it while you can. Every cloud has a silver lining. Maybe this will bring people together and be far more thoughtful about each other in a world where we’re so selfish, me included. And it gives us time to reflect on what life’s all about. And life is about love and sharing and generosity of spirit and coming together as one I hope will be the result of this.”

On a non-coronavirus topic, John revealed that he is a big fan of The Weeknd, who used a bit of “Your Song” in his After Hours cut, “Scared to Live.”

“I love him. I always have done and you can tell by the videos for the new album as well that it’s kind of … ‘Blinding Lights’ is such an 80’s-type record and it hits the nail on the head so perfectly, blending it with Abel’s sound,” John explained. “I saw him at an Oscar party after the Oscars and he’s always been such a sweet and lovely humble man. And he told me then, he said, ‘I got a surprise for you on this record.’ And I went, ‘Really?’ He said, ‘Yeah.’ And the surprise is that he’s borrowed a bit of ‘Your Song.’ ‘I hope you don’t mind, I hope you don’t mind,’ for the ‘Scared to Live’ track.”

“I’m so blown away I mean just to be part of his record,” he continued. “For someone my age and as someone who loves what he does, I’m so thrilled and I just love him. I just think … I was watching a couple of things this morning that were the same old stuff, the rap stuff and I was thinking, ‘Good old Abel, he’s making music. He’s making proper music.'”