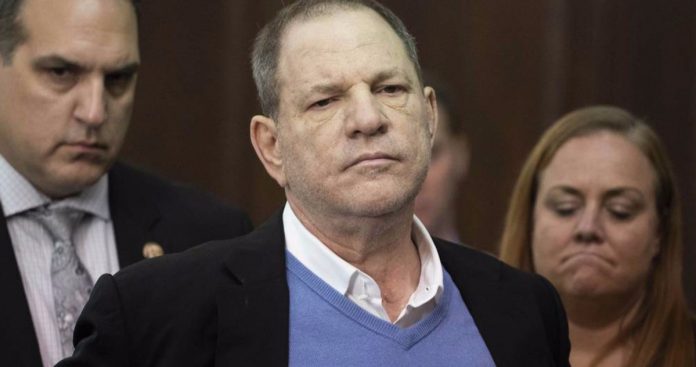 Harvey Weinstein has tested positive for the coronavirus. The disgraced former Hollywood mogul is now in isolation at the Wende Correctional Facility in Western New York. Weinstein is reportedly one of two inmates who has tested positive for COVID-19 at the correctional facility and is currently being treated. Weinstein just turned 68 years old and recently started his 23-year prison stay after being convicted of rape and sexual assault. He was convicted for sexually assaulting former Project Runway production assistant Miriam Haleyi and raping former actress Jessica Mann.

Harvey Weinstein’s spokesperson Juda Engelmayer says, “our team… has not heard anything like that yet.” Engelmayer could not confirm nor deny that the former producer is in isolation. Officials believe Weinstein was positive for coronavirus when he entered the state prison system last Wednesday from Rikers Island, a New York City jail. It is not clear what steps the prison is taking to make sure that the disease does not spread to other inmates who have come into contact with Weinstein and the other unidentified inmate.

Michael Powers, president of the New York State Correctional Officers and Police Benevolent Association (NYSCOPBA), could not comment on Harvey Weinstein’s current situation due to health privacy laws. Powers did note that he has ordered state corrections officials to suspend all “non-essential” inmate transfers during this healthcare emergency. “There is no better breeding ground for this virus than a closed environment such as a correctional facility,” said Powers. Regardless, the coronavirus cases are starting to go up now that people are being officially tested for the disease. As far as Weinstein is concerned, it is believed that he will remain in isolation for the time being.

The coronavirus has most of the world on lock down to prevent spreading the disease any further. Residents have been instructed to stay indoors and only go outside for essential reasons like the grocery store or the pharmacy. Basically, everybody is in prison like Harvey Weinstein while we wait for the dust to clear. Luckily, we have entertainment to keep us occupied. It’s not clear what Weinstein has been doing to help pass the time as he serves what will likely be the rest of his life behind bars.

After his initial sentencing, Harvey Weinstein was taken to the hospital for chest pains. He was then taken to Rikers, where 21 inmates have tested positive for COVID-19, and is now at the Wende facility as of Wednesday. The producer has not yet put out an official statement, but one can assume that one will be forthcoming, once all of the communication gets cleared up. As for when we can all expect to get back to normal day-to-day life, that is unclear at the moment, but it is believed that things will more than likely get worse before they get better. The Daily Beast was one of the first to reveal that Harvey Weinstein has the coronavirus.