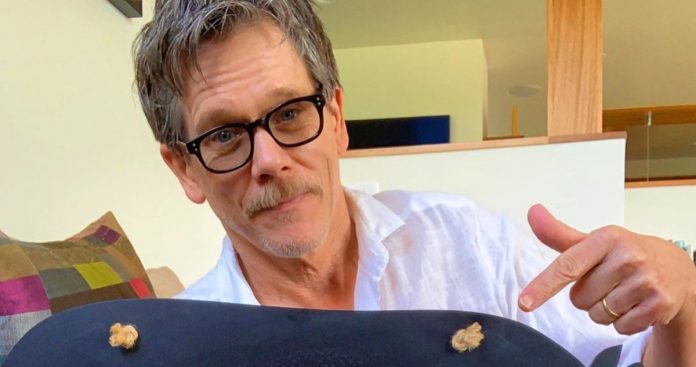 Kevin Bacon has come up with an amusing way to encourage self-isolation in the midst of the coronavirus pandemic with a “6 Degrees” social media campaign. On his Instagram account, Bacon posted a video of himself speaking about the coronavirus and how it threatens the safety of many of the people we know and love. Satirizing the “6 Degrees of Kevin Bacon” cinephiles use to link Bacon to virtually any other actor in Hollywood through their work, Bacon tells his followers he’s just six degrees away from them, making a point of just how easy it is for the highly-contagious coronavirus to spread from one person to another. From the video.

“Hi, folks. You know me, right? I’m technically only six degrees away from you. Right now, like people around the world, I’m staying home, because it saves lives and it is the only way we’re going to slow down the spread of this coronavirus. Because the contact that you make with someone, who makes contact with someone else, that may be what makes somebody’s mom or grandpa or wife sick. Every one of us has someone who is worth staying home for.”?

Bacon then holds up a pig-shaped sign that reads, “#IStayHomeFor Kyra Sedgwick.” As explained in the caption of the video, Bacon encourages others on social media to post photos or videos of themselves with similar signs stating who they are staying home for, and then asking six of their friends to do the same. “The more folks involved, the merrier – We’re all connected by various degrees,” Bacon goes on to add. Hopefully, the campaign will help convince more people to stay home as their government leaders have been suggesting, which will in turn save lives by helping to curb the coronavirus exposure.

Also known as “Bacon’s Law,” the “6 Degrees of Kevin Bacon” game has been floating around the internet for several years. The idea is that Bacon has worked on so many projects in Hollywood that any actor or actress can be linked back to him by using just six degrees or less of separation. By the time the practice made its way to Bacon himself, the actor was rather amused, though he also went a step further by taking the concept of Bacon’s Law and using it for good. In 2007, Bacon started the charitable organization SixDegrees.org, which allows people to become “celebrities for their own causes” by donating money to any charity in the United States.

To get involved in Bacon’s “6 Degrees” social media campaign, simply take to your preferred social media account to post an image or video of yourself and/or a sign stating who you’re staying home for to avoid spreading the virus. You can use the hashtag #IStayedHomeFor to directly link your post to the campaign, and you can also see how many others are posting similar messages of support in this battle with the coronavirus. You can watch Bacon’s “6 Degrees” video below, which comes to us from Kevin Bacon on Instagram.

Billboard & The Hollywood Reporter’s Pride Prom: Here’s What Went Down