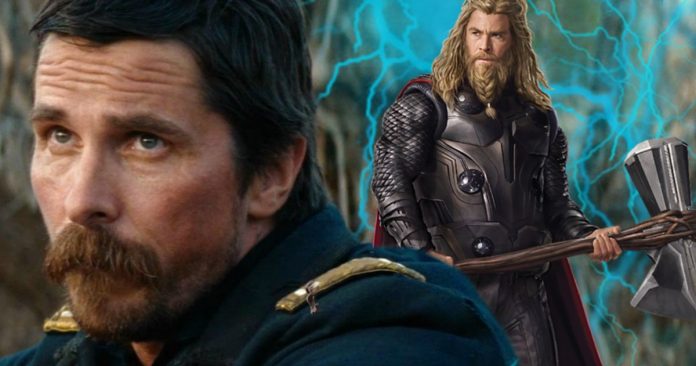 Christian Bale is officially playing the villain in Thor: Love and Thunder. Tessa Thompson confirmed the casting in a new interview. As for who Bale will be playing, that remains to be a mystery. The actor famously played Batman in Christopher Nolan’s Dark Knight trilogy and has not been around a comic book movie since then. Bale has taken on a variety of different roles over the years and is now ready to go work with Chris Hemsworth, Thompson, and Taika Waititi.

In addition to confirming Christian Bale will be the villain in Thor: Love and Thunder, Tessa Thompson also revealed that she has read Taika Waititi’s script. She was not able to say much about the highly anticipated sequel, but she did say that some old and new faces will be included, without mentioning who will be returning. Thompson confirmed that Valkyrie will still be the king of New Asgard when the movie hits theaters, but did not reveal any other information.

Christian Bale has been rumored to be the villain ever since he was cast in Thor: Love and Thunder. Like everything else Marvel Studios does, his role is being kept under wraps for the time being. Beta Ray Bill seems to be the one that Marvel Cinematic Universe fans think Bale will be playing, but that has not been confirmed. Plus, even if he is playing that specific character, Taika Waititi and the studio will likely have him changed from the comic book source material. Nothing is ever a direct copy from the comics on the big screen.

We’ve seen Christian Bale play the villain before, including in his breakout role as Patrick Bateman in 2000’s American Psycho. He’s also played questionable characters in Harsh Times, The Prestige, and Hostiles. However, we haven’t really seen him use his comedic ability on the big screen. Taika Waititi and crew brought a lot of humor to Thor: Ragnarok and Thor: Love and Thunder will undoubtedly be the same, so it will be interesting to see Bale trade jokes with Chris Hemsworth, Natalie Portman, and Tessa Thompson. He could be taking on more of the serious villain role too. We’ll just have to wait and see.

Thor: Love and Thunder begins shooting later this year and hits theaters in November 2021. Before then, Christian Bale will start working with frequent collaborator David O. Russell on an upcoming untitled project. While not much is clear about that movie, we do know that Bale will not be drastically shifting his weight to fit into the role. After years of crazy body transformation, the actor has decided that those days are behind him. Perhaps he’ll get some CGI help in Thor: Love and Thunder like Josh Brolin did when playing the villainous Thanos. The interview with Tessa Thompson was originally conducted by Entertainment Tonight.

BossLogic’s The Last of Us Poster Imagines Chris Evans and Mckenna Grace as Joel...