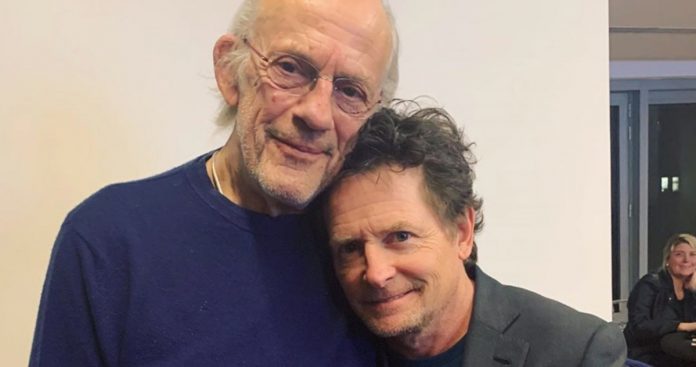 Back to The Future stars Michael J. Fox and Christopher Lloyd have reunited once again as seen in new photos posted to social media by the former co-stars. As anyone familiar with the iconic movie and its two sequels will know, Fox and Lloyd famously played ’80s time travelers Marty McFly and Emmett “Doc” Brown, making the two legendary actors synonymous with the 1985 classic. On Wednesday evening, Fox and Lloyd were back at it as they both attended the annual charity Poker Night event for the Michael J. Fox Foundation for Parkinson’s Research.

Taking to Instagram, Michael J. Fox and Lloyd posted photos of their reunion, and there’s no way you won’t love them if you’re a Back to the Future fan. “Going 88mph for the @michaeljfoxorg Poker Night,” Lloyd wrote in the caption of his Instagram post, appropriately referencing the movie. Meanwhile, Fox says he’s going “all in” with Lloyd in the caption of his posted photo, and it’s nothing short of awesome to see. All that’s missing here is George, Lorraine, and Biff, and of course the time-traveling DeLorean. You can check out both photos of Fox and Lloyd below.

RELATED: Tom Holland Is Marty McFly’s Son in BossLogic’s Back to the Future 4 Poster

Released in 1985, the original Back to the Future is very highly regarded and considered by many cinephiles to be among the very best movies of all time. In addition to Michael J. Fox and Christopher Lloyd, the movie also stars Crispin Glover, Lea Thompson, and Tom Wilson. It tells the story of a teenage time traveler who travels thirty years into the past and inadvertently jeopardizes his own existence when he meets the younger versions of his parents. The first sequel, Back to the Future Part II, sends Marty and Doc thirty years into the future to save his future son from trouble. 1990’s Back to the Future Part III closes out the series by sending the time travelers a hundred years into the past, making the movie partly a Western.

In the years since, Lloyd has been vocal about his desire to make a fourth Back to the Future movie, suggesting he’d be happy to reprise the role of Doc Brown if ever given the chance to do so. For better or for worse, however, franchise creators Robert Zemeckis and Bob Gale have adamantly insisted they will never give the green light to a sequel or reboot, preferring to keep the franchise as a trilogy. Be that as it may, it hasn’t stopped some fans from hoping to one day see another sequel, as seen in some recent BossLogic fan art of Tom Holland as Marty McFly’s son.

Perhaps we’ll never see another Back to the Future movie, but I say let’s keep these cast reunions of the original stars coming. Over three decades since we last saw Lloyd and Fox on the big screen as Doc and Marty, it’s always awesome to see the time travelers back together again. The images above come to us from Christopher Lloyd and Michael J. Fox on Instagram.

Topics: Back to the Future

pop culture brain — Watch the Trailer for Netflix Adaptation of The…