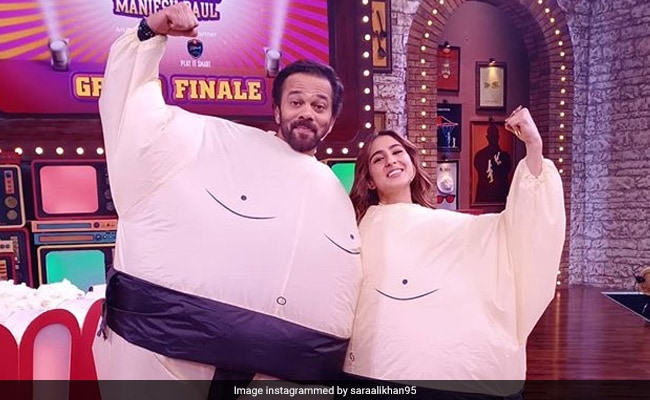 Sara Ali Khan starred in Rohit Shetty’s film Simmba and looks like now she’s eyeing the next film in the super-popular Golmaal series. Sara and Rohit Shetty, who will be guests on the finale episode of comedy show Movie Masti With Maniesh Paul, featured in a fun-filled promo, in which the filmmaker trolled the Simmba actress and how. The promo reveals that sometime during the finale episode, Sara asks Rohit Shetty: Golmaal ke liye aapko koi heroine mili hai (Have you selected a heroine for the next Golmaal film)?” To which Rohit Shetty replies: “Jab bhi Golmaal banayunga, aap hi ko lunga (Whenever I’ll make Golmaal, I will take you only).” This called for some celebration on Sara’s part, who was abruptly cut short by Rohit Shetty.

He added with a straight face that he has been asked by the makers of the show to “beech beech mein mazak bhi karna (crack jokes in every now and then).” Watch the ROFL video here:

Rohit Shetty’s Simmba was Sara Ali Khan’s second Bollywood film, which released the same month as her Bollywood debut and was a blockbuster at the box office. Sara co-starred with Ranveer Singh in the cop drama. Meanwhile, 2017’s Golmaal Again remains the last in the film series so far.

On the work front, Sara Ali Khan is busy with the shooting schedule of Coolie No 1, which is the remake of Govinda and Karisma Kapoor’s 1995 of the same name. Meanwhile, Sara has also wrapped the shooting of Imtiaz Ali’s tentatively titled Love Aaj Kal 2. Sara co-stars with Varun in Coolie No 1 and with Kartik Aaryan in Love Aaj Kal 2.

FINNEAS – I Lost a Friend (Audio)

Rajinikanth To Be Honoured With Icon Of Golden Jubilee Award At IFFI, French Actor...

Lizzo & Macaulay Culkin Dancing Onstage Together Is the Best Thing We’ve Seen All...