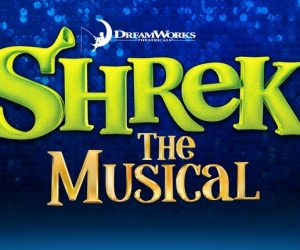 Listen to Rick Rizer’s Conversation with  Michael D. Gore who plays Shrek in this upcoming production with the Charleston Light Opera Guild

Shrek The Musical will be presented by the Charleston Light Opera Guild on August 2, 3, 4, 9, 10 and 11, 2019 at the Charleston Coliseum and Convention Center Little Theatre.
Based on the Oscar-winning DreamWorks Animation film, Shrek The Musical is a TONY Award-winning fairy tale adventures featuring all-new songs from Jeanine Tesori and book and lyrics by David Lindsay-Abaire.

Shrek The Musical premiered on Broadway at the Broadway Theatre in 2008 with Brian d’Arcy James as Shrek, Sutton Foster as Princess Fionna, Christopher Sieber as Lord Farquaad, Chester Gregory II as Donkey, John Tartaglia as Pinocchio and Kecia Lewis-Evans as the Dragon. It was nominated for seven Tony Awards.

Shrek The Musical is a one-of-a-kind, hilarious fairy tale in which curses are reversed, monsters get the girls, donkeys, and dragons find love, and princesses are beautiful in all shapes and sizes. Grumpy, gruff, green ogre Shrek lives alone in the swamp. The world is fearful and mocking of him, and he is more than happy to leave the world to itself, in turn. Suddenly, his hermit existence is thrown open, when a group of homeless fairy-tale characters – Pinocchio, the Gingerbread Man, the Three Little Pigs, and more – burst upon his swamp, seeking refuge from the persecution of the cruel, vertically-challenged Lord Farquaad. Shrek seeks out Farquaad, who offers him a deal: if Shrek rescues Princess Fiona (whom Farquaad wishes to marry for her crown), then Farquaad will ensure the return of Shrek’s swamp by returning the fairy tale creatures to their homes.
In a desperate attempt to regain his swamp’s hermetic piece, Shrek enters the world for the first time in his life. He travels to Princess Fiona’s prison, rescues her from a fire-breathing dragon, and then is forced to get to know the princess. The musical is sure to entertain and make audiences believe in happy endings.

Every Movie and TV Show Streaming in May 2020