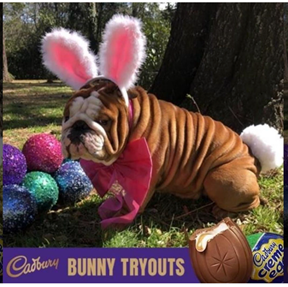 Farewell, Peter Cottontail  Cadbury Eggs is making a pudgy pup the new face of Easter. Here comes Henri the bulldog hopping down the bunny trail: He won the candy companys first Bunny Tryouts competition. Hell replace their famous clucking bunny as the star of the annual ad campaign for the cream-filled chocolate eggs, marking the first switch-up for the company in 35 years. The new ad will premiere next month, just in time for Easter.

Over 4,000 pets tried out for Cadburys competition. To enter, pet owners had to submit photos of their furry friends donning bunny ears. Judging by Henris adorable rolls, hes a huge fan of Easter treats. The 18-month-old English bulldog hails from Wilmington, N.C., and lives with his parents Kathie and Tim Santillo. In addition to stardom, Henri (and his family) will receive $5,000. Cadbury also donated $10,000 to the ASPCA in honor of the competition.

‘Take What You Want’ Debuts On Mainstream Rock Songs